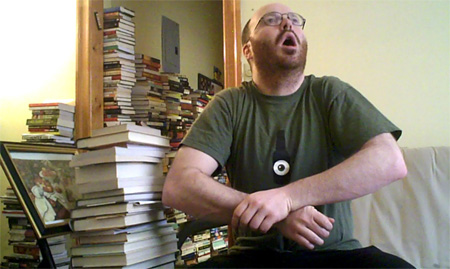 t the end of the end of May, edrants.com announced the appointment of its American editor Edward Champion to the role of acting editor. Up until this point in time, it had never occurred to us to have American editors, acting editors, or indeed editors of any type. There was just one guy at the helm named Ed. Perhaps his first name is actually “Editor.” But since certain literary magazines have seen so many people leaving, resigning, and otherwise exiting the doors with a banker’s box of literary belongings, it seemed necessary for us to apply a needless degree of self-importance to this website. Champion came to edrants.com after working in various office jobs and has been with the website since December 2004. During that time he has interviewed over 300 authors and written for numerous newspapers. He hopes to continue to boast about himself because he’s under the false impression that community comes naturally through relentless self-absorption. Ergo, this interview, which doesn’t carry a byline but appears on the very website that Champion claims is editorially independent! edrants.com recently caught up with Champion to talk abut his background, his inspirations and future issues posts of edrants.com.

Can you tell me a little about yourself? What’s your background?

I was born in California, and was beaten regularly by my parents. I tried to get a job delivering newspapers, but was told that John Freeman was delivering all the papers in the neighborhood. And since Freeman wouldn’t give up a few blocks, I was forced to work in a greasy diner, where the doors were locked until midnight and I was forced to hitch rides to and from work by an unpleasant busboy named Linus, who demanded the occasional hand job. The consequences of these hand jobs can be seen in the present cutbacks in newspaper book review sections. John Freeman tried to save them, but even he couldn’t. And yet he gets a silly promotion and an Observer article, and I’m trying to string together checks to pay the rent. I’m developing an ego. This worries me.

What excites you most about edrants.com?

The celebration of myself. The opportunity to take smug photos of myself with books and to pretend that my foldout chair is something more than it really is because there are books stacked on top of it.

The chance to do this now is also a great privilege. Because I’m white and I’m male. I don’t believe there’s a lack of good writing in our world, but I do believe that we should only publish boring suburban fiction. The kind of soporific stuff you see in the New Yorker, but that permits people to curd the spasms of their dismay into a balled up Kleenex. As a cultural website that is read internationally, edrants.com is in a unique position to be found by desperate men at 3:23 AM. The men will get pissed off that they didn’t find pornography and they will begin sending me death threats by email. It’s what our readers expect of us. I hope you don’t mind me using the first person plural.

Good. I was beginning to get worried. I really needed some time to develop some kind of narcissistic personality disorder.

How do you think edrants.com can be improved?

It’s absolutely perfect the way it is, you ungrateful bastard! We don’t live in an Anglo-American world anymore, except we do. Because I’m the Acting Editor of edrants.com and John Freeman is the Acting Editor of Granta. You need to have white bread elitists in power who pretend that they really care. We need to do a better job of pretending that we’re actually reading writers who aren’t white. And that means name-dropping a continent or two, rather than a country.

In what direction will you take edrants.com as Acting Editor?

Will edrants.com continue to be themed?

Well, it was never really themed to begin with. I don’t know where you’re getting these questions from. We are averse to themes because they remind us of too many themed office parties in which a lot of miserable people sat around drinking cheap merlot in red paper cups under a pinata for a Cinco de Mayo-themed party. Nevertheless, the world needs more themes. We need themes so that people can be reminded of what they already know instead of actually challenging their perceptions.

Every now and then, though, we’ll have no theme. Until that crazy Swedish bitch calls me to London and asks me what the hell I’m doing with her money. Then I’ll sheepishly give you an edrants.com with themes attached.