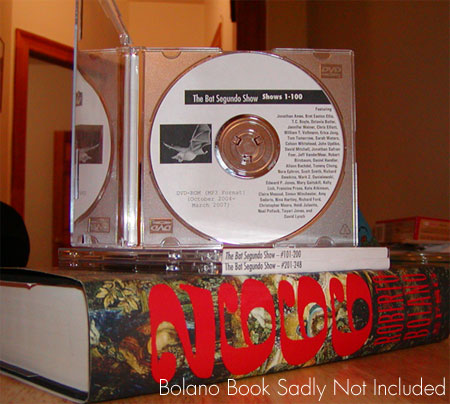 We’ve received a few requests from listeners asking us how they can get DVD-ROMs of the show. And since Christmas shopping has started, and some of you out there may be on the lookout for a literary stocking stuffer, we’ve decided to begin offering DVD-ROMs of the first 250 shows of The Bat Segundo Show at the very affordable price of $50. (Shows #249 and #250 will be coming online very soon.) For just 20 cents per episode, you’ll be able to experience more than 200 hours of the oddest cultural conversations that can be found on the Internet.

This three DVD set features all programs produced from October 2004 to the present day.

Episodes will still be available for free download. But with the purchase of this three DVD set, you’ll be helping us tremendously to continue producing the show, and you’ll save yourself a considerable amount of time downloading them all at home. Particularly if you have dial-up.

The price includes shipping. Please note that all shipments are being sent by FedEx Express Saver to ensure a reasonable delivery time that we can track, and, due to costs, we are currently limiting delivery to the United States. If, however, you’re based outside the States, email me and we’ll work something out.

If there’s enough interest, then we’ll be unloading some additional merchandise, including iPods that have the shows already loaded. But for now, we wanted to offer an affordable way for you to get the shows all in one burst. And if you act swiftly, and you foresee a good deal of commuting time for your Thanksgiving holiday, then we can get the DVDs to you before the turkey is carved.