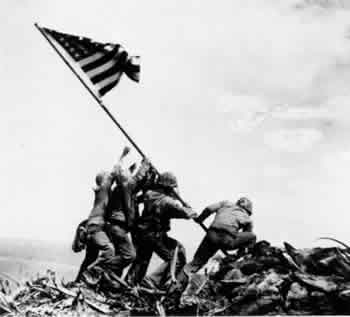 Using deductive prowess, several bloggers determined that Joe Rosenthal’s famous photograph, “The Battle of Iwo Jima,” may have been staged by Rosenthal. The bloggers once again triumphed over the mainstream media by Googling the words “Joe Rosenthal staged” and turning up this Fortune City page, which offered nothing more than conjecture on the subject. The Google search result took 0.06 seconds.

“If someone is thinking about it, then someone is hiding the truth,” said the blogger behind Little Green Gerbils, who speculated upon Rosenthal’s photograph at his day job when his boss wasn’t looking.

“Jay Rosenthal is a godless heathen and should be strung up in public before the weekend,” noted Michelle Milkme. “Never mind that he’s in his eighties. Vigilante justice applies even to those past their prime.”

The bloggers, who had abstained from ice cream to facilitate their anger, reportedly experienced higher blood pressure which coincided with their levels of outrage. The fever and hypertension spread to their readers, who offered more fury and amateur speculation in thousands of comments.

“What the maintream media doesn’t realize is that we too use Photoshop,” said Milkme. “I don’t quite understand all the filters and tools the way a professional art director does, but I do know how to crop a photo and save it as a new filename that I can upload to my site. So do most bloggers. The mainstream media will now think twice about messing with us. We have cropping and uploading skills!”