So I was playing a game of “Where are they now?” with my culturally obsessed friend and Anna Chulmsky’s name came up. We wondered what had happened to the girl from the My Girl movies. Well, it was only an IMDB movie listing away before we discovered a film called Blood Car. Here’s the tagline:

In the near future gas prices have reached astronomical highs nearing $40 a gallon. One man, Archie Andrews, an environmentalist elementary school teacher, is trying to discover an alternate fuel source. While experimenting with wheat grass, Archie accidentally stumbles upon a solution. That solution turns out to be blood. HUMAN BLOOD!

That is one deranged movie idea. But I’m a warped man and I would gladly pay $10 to see this movie. 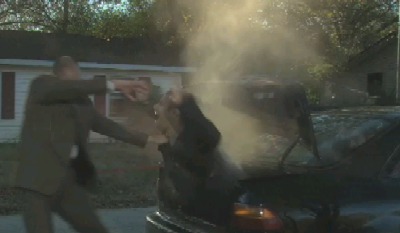 There’s a trailer for the movie at the site, which seems to suggest that the titular car has a blade in the back trunk which chops people up and uses the blood for fuel. A tracking shot reveals gas prices at around $32 a gallon. The main character has the batty name of Archie Andrews. Is it pointed satire? Or just a cheeseball grindhouse flick? More importantly, is there anyone batshit crazy enough to distribute this film? Does a movie like Blood Car have any chance in today’s marketplace?

Small wonder how the filmmakers got the domain bloodcar.com. I don’t think there was much demand.

Even so, this interview suggests that director Alex Orr has the right influences: “I’m a big Sam Fuller fan and we were just talking about stuff we could rip out of the headlines and we’d been talking about doing a horror movie for a long time and we’d keep seeing these really awful horror movies. You go to Blockbuster and it’s the genre that been excused—you know it’s just “boobs and blood” and it’s not even the right exposures, or good sound. And these films get in the video stores. And we thought let’s make a feature that somebody will get to see. And with the really, really limited resources that we had, a horror [film] seemed the way to go, and we just hopped on the back of the little gas business. So yeah it was pretty much out of frustration. We wanted to make a movie and we heard another movie sold and we jumped up and down and cussed.”

But Blood Car shows that there’s still quite a bit of cult movie innovation out there. Perhaps we’ll know the verdict once this film hits the festival circuit.