Deeper questions about Bouchercon’s troubling insular nature will have to wait. I’ll just say for now that, more than BEA, APE, WorldCon and nearly every other writers or readers conference I have ever attended, you will be a conversational pariah if you haven’t read the latest sixty hot mystery titles. I’m sure these folks are perfectly nice, but, given how fixed and unwavering they are on this subject (it is as if that creep who assaulted those kids in Colorado never happened), I’d rather head down State Street and have a beer and a brat with the Madison locals. More on this subject later.

For the moment, here’s a report on this afternoon’s panel Reviewer Ethics: The Reviewer’s Responsibility. 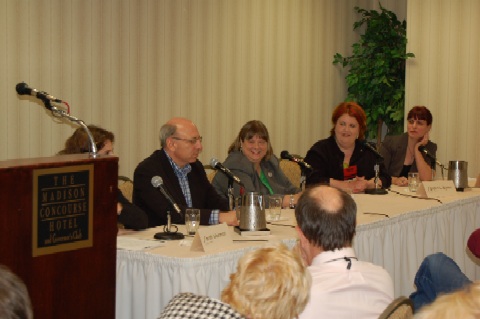 I entered the room as the group was discussing the similarities and differences of professional and amateur reviews. Jordan opined that online reviews offered a looser and freer feel, with offbeat and quirky books getting offbeat and quirky reviews. She didn’t follow a set formula, but considered pro reviews to be more of a challenge. Gandle, by contrast, took the same approach for both pro and an amateur reviews, suggesting that a mystery review shouldn’t be as cryptic as certain reviewers for the New York Times Book Review. “I have absolutely no idea what she’s saying,” said Gandle.

Cogdilll noted that she felt giving away the plot was a violation of the reader’s trust. This led Byrne to chime in about police procedure discretions also being a violation of this trust. But who has the time, amateur or pro, to confirm these auctorial solecisms?

Cogdill, who reviews mysteries for the South Florida Sun-Sentinel, inferred that the pro and the amateur set faced the same dilemma, pointing out that what she writes about often goes directly into the paper, with a quick look-see through a copy editor if there’s time.

Sarah brought up the question of conflicts of interest. Cogdill was particularly adamant about this, pointing out that she always paid her own way whenever she was wined and dined by a publisher. There was a difference between being a friend and being friendly, although this depended with each particular person. Gandle took a more egalitarian approach to the issue, noting that he buyed authors drinks and sometimes authors bought him drinks. He believed that none of this got in the way of his reviewing. Jordan likewise felt that she could aver the difference between the author and the work. Gandle, however, tended to avoid personal contacts with authors. “I don’t want to be punched out,” he said, leading Jordan to offer her services to protect him, if any physical confrontation went down at Bouchercon.

Cogdill, as ethical as she was, noted that if an author had a problem with one of her reviews, “it’s the author’s problem, not mine.” Some authors take issue with the work, some don’t. But the author’s temperament had, in her view, little to do with the reviews. “I’ve panned nice people,” she said. “I’ve raved about raging assholes.” While she didn’t review her friends, she still noted that she would review her husband’s book.

Offering a perspective from Australia, Byrne noted that reviewing in Australia involved negotiating a tiny literary community, one very hard to break into. But she seemed content to pull her punches, noting that if the book was bad, she wouldn’t review it.

Sarah asked for a ball-park estimation on the number of books each panelist read in a year. Cogdill offered a precise 208 (four books, fifty-two times a year). Jordan: Over 200. Gandle: Only two a week, with a full-time job. He apologized for being a slow reader.

Did publicists have any sway over what books were covered? To a certain degree. Sarah noted that it was part of her job to be aware of publishing trends and that she had to peruse “the reads of the year.” Cogdill did feel it a duty to cover “the big read of the year,” but all panelists expressed variations on these “big reads” often being disappointed. Case in point: the many Templar books that had crowded the mystery market.

An audience member asked if a first-time writer writing for a small-time press could “cut through the clutter.” But the answers to this question were fairly rote. Jordan’s answer, for example: a soft touch, quiet reminding.

Cogdill noted that gimmicks were more problematic than they were worth. One author had sent a package ten years ago having to do with the World Wide Web. She opened the package and was greeted by plastic spiders exploding out of the package, causing Cogdill to scream and the novel to be discarded. She cited another incident involving an author who had sent a book in a small coffin. The book was contained in a satin bed and it had cost the author $20 to send this through the mail. In the end, the creep factor had caused her to disregard the book.

Professionalism was a virtue. Cogdill described another novelist who had applied various Post-Its along the manuscript. (“I’m going to beef this section up,” read one.) Further, getting books in the hands of reviewers six months before their pub date was considered a great way to improve the possibility of this book being considered. Jordan noted that she could better plan her reading schedule if the book was in her hands well in advance.

A gentleman from the back asked what the point of writing negative reviews were. Gandle cited a well-known Amazon reviewer, who he had apparently attempted to persuade against writing nothing but positive reviews. Balance was important not only for critical acumen, but, as Jordan noted, to present readers with an idea of what the reviewer’s tastes were. The panelists, for the most part, disregarded Kirkus, PW and any of the other major review sources, opting instead for the cold review approach.