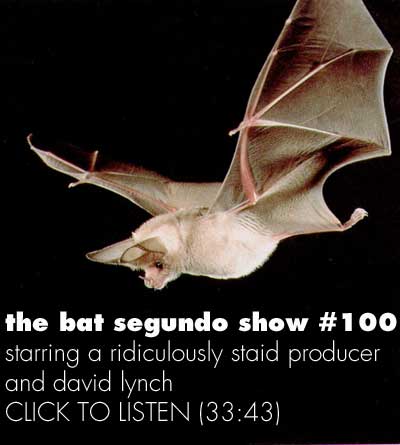 Condition of Mr. Segundo: In absentia, terrified of meditation.

Subjects Discussed: Transcendental Meditation, true happiness, contending with stress, fear and anxiety, anger, the relationship between filmmaking and TM, inner happiness, walking vs. TM, Knut Hamsun, Einstein’s Theory of Everything, Dostoevsky’s 1866 publishing deal, on coming up with ideas, the art life vs. the business life, Frank Silva’s unexpected casting as Bob in Twin Peaks, and whether Lynch understands his own films,

Lynch: Let’s talk about suffering. Like in movies, people die. Well, you say, you don’t have to die to show a death. And there’s all kind of suffering and torment and all these things in a story. And, for me, those things come from ideas. Now when you catch an idea, you see the thing. You hear the thing. You feel and see and hear the mood of it. And you see the character. You almost see what the character wears. And you see what the character says and how they say it. That it’s an idea that comes all at once. And you know that idea.