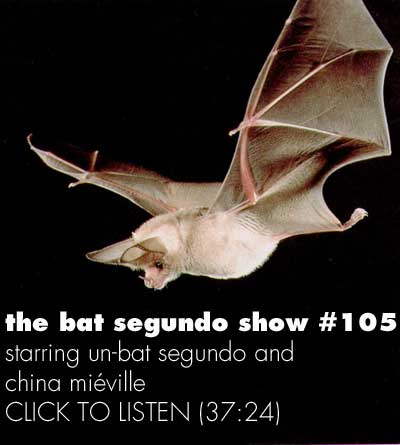 Condition of Mr. Segundo: One might say quite “un”-well.

Subjects Discussed: World-building, building a world with an urban center, being a “city animal,” the imagination-per-page ratio, a creative license to put in anything, C.S. Lewis, ideology and YA books, Marxism, terrorism, the 1952 London smog, London bus drivers, politics and fiction, inventing monsters, environmentalism, the pleasure and joy of the grotesque, Miéville’s creative veto process, Un Lun Dun as a creative experiment, having to lay off arcane words in a YA book, the nature of spoilers, the underrated virtues of sidekicks, narrative surprises, the journey vs. the destination, rigid plotting, the two types of people who respond to “fridge man,” and how literal puns transform into monsters.

Miéville: There are different ways of world-building. When we say “world-building,” we tend to think of that D&D-esque kind, which is not a diss incidentally. It’s just a description. It’s sort of a consolidation between the geography and the history and the culture and so on before writing the story. At that’s one way of doing it. But then there are others, which are less rigid, less to do with internal coherence, in the same way. So in terms of something like Un Lun Dun or some of the short stories or even King Rat, and the book I’m working on the moment as well, it’s less to do with having a coherent back-narrative and more to do with having a coherent moral and emotional feeling. I know the whole question of world-building is quite controversial at the moment, because M. John Harrison just wrote his blistering attack on the idea. Which I thought was, characteristically for his stuff, was a brilliant provocation and full of a certain kind of angry integrity. I don’t agree with him exactly, but I think it would be a fool who dismissed his criticisms out of hand.