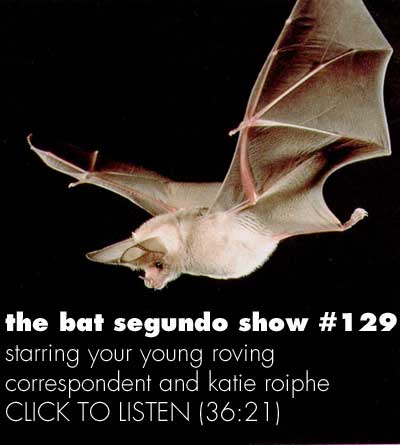 SPECIAL PROGRAM NOTE: I had arranged an interview with Katie Roiphe because I felt that she might be misunderstood. Ms. Roiphe had laid down some interesting ideas over the years that had pissed more than a few people off, including the notion that women were primarily responsible for date rape in her tract, The Morning After. Extraordinary claims, of course, require extraordinary evidence. And it was because of this that I wanted to determine how much of Ms. Roiphe’s personal ideology influenced her views. Late in the interview, Ms. Roiphe grew contentious when I asked a personally reasonable question and quoted a specific passage in her most recent book, Uncommon Arrangements, in relation to an affair initiated between Harry Andrews and Winifred Holtby, which can be found on pages 282-283 in the hardcover edition:

They slept together, one spring, when she had taken a cottage by the sea. This was entirely her doing: she had decided to abandon pride and convention and push their romantically charged friendship to a crisis.

Ms. Roiphe at first denied that she had written this passage, until I found the page and showed it to her during the course of the interview. She then claimed that the meaning I had averred, that the woman is solely responsible for a sexual liaison, was wrong. Without passing the same judgment on Ms. Roiphe that she appeared to cast upon me, I leave listeners to make up their own minds as to whether the phrase “this was entirely her doing” reflects an instance where Ms. Roiphe’s personal ideology influenced her scholarship, or whether Ms. Roiphe was being needlessly belligerent. But then I’m not the one with the Ph.D.

Subjects Discussed: On whether the state of a marriage can be judged exclusively upon letters and notes, inferring from perspective, Phylis Rose’s Parallel Lives, Lytton Strachey’s Eminent Victorians, avoiding 21st century relationship terms, “marriage a la mode,” Radclyffe Hall, H.G. Wells, George Bernard Shaw, the relationship between class fixations and subject choice, interconnected aristocracies, the difficulties of obtaining divorce in the United Kingdom and the Marriage Act of 1949, contemporary pressure on women in thirties to get married, the influence of Jane Austen on married life, the theatrical nature of Ottoline Morrell’s philanthropy, the influence on Roiphe’s ideology upon her scholarship, relying upon books vs. relying upon empirical evidence, on being allegedly misquoted, and Roiphe’s unchanging ideology.

Roiphe: Anyway, I’m actually out of time. Um, you can have one more question.

Correspondent: Well, I actually wanted to ask you a question about The Morning After.

Correspondent: If we revisit that, do you still feel that the word “survivor” is bandied about too much in relation to date rape or — and if the term “survivor” is still unacceptable to you, how do you expect someone to cope with a legitimate psychological grievance?

Roiphe: I’m actually interested in talking about this book and not my previous work. But, yes, I stand by everything that I said at the time that I wrote that book.

Correspondent: Okay. I mean, you know, don’t you — doesn’t your ideology change in any manner?

Roiphe: As I say, I stand by everything I wrote in this book and I’m right now interested in talking about Uncommon Arrangements.