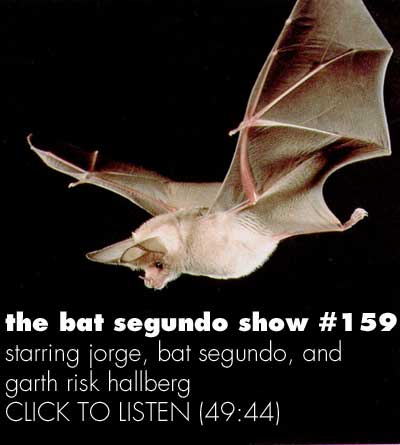 Subjects Discussed: Authoring a conceptual book with veto power over the designer, family detachment, cross-references, Bay Area literary magazines, the McSweeney’s influence, Em Magazine, book art practitioners, being on a first name basis with Dave Eggers without really meeting him, teaching a class on design with scant knowledge, frightened photographers, how to organize artists without having them succumb to advertising influence, inviting readers to cut up the book, John Barth’s Lost in the Funhouse, nepotism and William Gass, character who share surnames with authors, speculating on character deaths, Garth Risk Hallberg’s streetcred, drugs, the problems of a representative North American family living in New York, lying and imagination, the “healthy glow” on cheerleaders, penis envy, lengthy sentences and commas, Raymond Queneau’s “sonnet machine,” being hostile towards Geos, plastic bags and trees, the Great Pacific Garbage Patch, Ian Frazier’s “Bags in Trees,” on the reader being unfairly tricked by the book’s trompe-l’œil, whether all books should be published in hardcover, e-books, and reading Bob Woodward in PDF.

Hallberg: Something about the character of Lacy, who is the cheerleader. She seems to always be ensconced in a healthy glow to me. And that sounds kind of trite. But in a way, she’s the least afflicted of these characters. Again, I think I have an image in my head of someone I went to high school with, who was just kind of — again, this sounds trite, but she was kind of the all-American girl and she was happy and functional and emotionally available and friendly and just a generally cool person.

Correspondent: But no healthy glow! You haven’t described that!

Hallberg: Well, and she had an extremely healthy glow.

Correspondent: Okay, really. I mean, how — can you elaborate on the healthy glow? What kind of healthy glow did she have? How did this actually get from ten years later into this book?

Hallberg: Do I use the phrase “healthy glow?”

Correspondent: You use the phrase “healthy glow.” That’s why I’m so excited about it.

Hallberg: (laughs) I guess it is sort of an exciting concept.