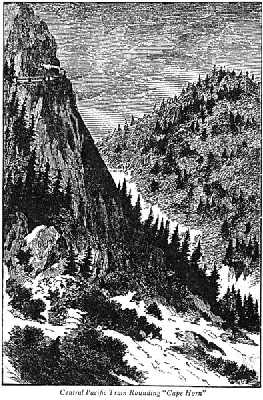 If you’ve ever made the drive to Reno or you’ve had the good fortune of riding today’s version of the Central Pacific Railroad, chances are you’re familiar with the Cape Horn grade. Near Colfax, the railroad juts upward and if you are fortunate enough to ride the railroad, one makes out a stunning view overlooking the American River.

The story promulgated over the years is that the grade was effected by Chinese laborers. White men could not do it. Indeed, they could not be coaxed to stick around, despite the best efforts of CP flack men. The Chinese did. And in fact, when they saw the diabolical mountain, they persuaded the engineers that they could cut through it. They did so by constructing sturdy bamboo baskets hung ominously over a vertical precipice. The laborers worked tirelessly, drilling gunpowder into the ravine and exploding staggering amounts of mountain rock for the cutaway view in existence today. And the tale of Cape Horn’s creation (along with the exploitation of Chinese laborers) stands as a West Coast legend comparable to Dutch settlers bamboozling Manhattan Island from natives for about twenty-four dollars in jewelry.

Edson T. Strobridge, however, disagrees with this well-established story (spelled out in nearly every railroad history book). While I admire the audacity of his brazen stance, one has to consider his ulterior motives. It ws James Harvey Strobridge who was, after all, the foreman of the project. Strobridge, so the story goes, was initially resistant to using Chinese labor. But when work progressed, even he had to confess that they got the job done.

One of Edson T. Strobridge’s chief defenses is that no record of the Cape Horn cut can be found in Collis P. Huntington’s papers. Well, it’s worth noting out that the CP also didn’t keep a record of Chinese casualties either. It strikes me as a bit naive for anyone to assume that businessmen would memorialize their more illicit deals.

It’s also difficult for anyone to remain objective when they are more concerned with restoring the reputation of “much maligned” ancestors. The history of the railroad is ripe with fantastic achievements and scandals from laborers and businessmen alike. But when hot heads get in the way of exposing human achievement, it’s about as distasteful as reading a priapic military historian who arrives on the scene with preconceived notions.