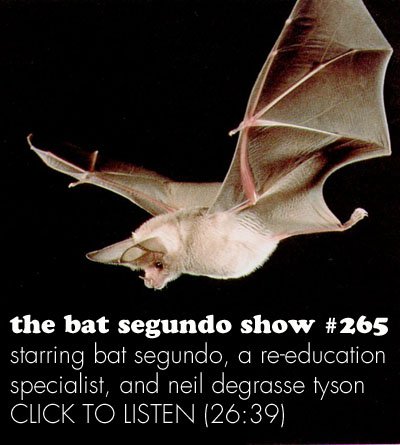 Neil deGrasse Tyson is most recently the author of The Pluto Files.

Condition of Mr. Segundo: Reconfiguring his planetary paradigm, with the aid of minatory electrodes.

Subjects Discussed: The Great Planet Debate, sensible classification systems, “reorganizing” the solar system, why the International Astronomical Union wasn’t approached before the Rose Center display was established, the usefulness of the word “planet,” playing 20 Questions to gain insight into what Tyson talks about, Copernicus, acceptable groupings, quibbles with the New Horizons reconnaissance mission to “complete” the exploration of the solar system, government and space exploration, Sedna vs. Pluto, efforts to explicate Sedna’s orbit, the ethical implications of scientists who write popular books, scientists and get rich quick schemes, pedagogical paradigms, manned missions to Mars, the celebrity culture of astronauts, manned space program vs. robotic expeditions, how science can endure in the face of looming budgetary cuts, the financial return of science, communications with the Obama Administration, and the possibility of the asteroid Apophis colliding against the Earth in 2036. 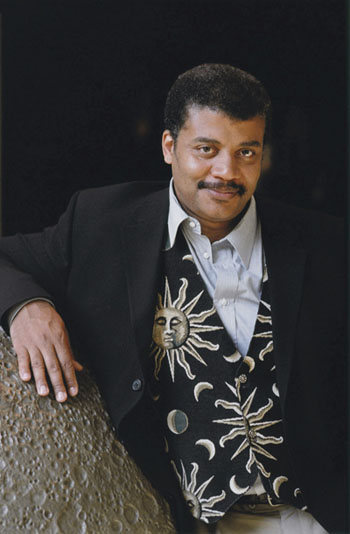 Tyson: We just reorganized the solar system, combining objects of like properties together. And at the time, more frozen bodies — small with tipped orbits, crossing the orbits of other planets — were found in the outer solar system that looked more like Pluto. And Pluto looked more like them than any one of them looked like anything else in the solar system. So all we did was group Pluto with its brethren in the outer solar system. Then we grouped the gas giants together as a family. Then we grouped the terrestrials — Mercury, Venus, Earth, and Mars — together. So the family photo of the solar system was presented in these groupings. At no time did we recount the planets in the solar system. And, in fact, the word “planet” is undervalued in the exhibits entirely. We prefer to focus on physical properties of these objects, rather than try and salvage a word that hasn’t been formally defined since before Copernicus.

Correspondent: Well, to talk about the notion of introducing this exhibit and not tipping anybody off initially, until this New York Times reporter ran with the ball and created something of a media storm, you…

Tyson: Something of a media storm?

Correspondent: Something of a media storm.

Correspondent: Well, I’d like to use reverse hyperbole here. But in the case of this considerable media storm, you didn’t tip anybody off. And I’m curious. I mean, the sentiment in this book that you express multiple times is “Science is not a democracy.” And I’m wondering though why you didn’t approach the IAU to essentially get them to get with the program. That Pluto is not a planet. That it is essentially a TNO, and…

Correspondent: Yes, exactly. Exactly. I’m wondering why. Perhaps you could have smoothed things over a little bit with the IAU before introducing this. Does the IAU really not matter in this particular group?

Tyson: IAU cares about what a planet is. And we didn’t. It’s that simple. We didn’t present a case for planethood or not. All we did was say, “Here’s an interesting way to look at the solar system.” Put Pluto with the icy bodies and present it as such. We didn’t say Pluto was not a planet. We made no such claims. We were widely stereotyped for having done so. And that’s the simplest — if you don’t have the time to read what we did, then that’s the simplest thing that people did. Many interviewers — media — would come up to me and say, “So how many planets are there in your exhibits?” And I said, “We don’t count planets.” We just simply don’t count planets. So I had no interest in lobbying the International Astronomical Union. Because they’re concerned with the definition of planet. And when they do, fine. Define it however they want. It doesn’t change sensible ways to organize the information content of the solar system.

Correspondent: But in the minds of people. You had to be aware of the public perception. I mean, in this book, you point, of course, to the Caltech parade in Pasadena, the funerals for Pluto, the endless editorial cartoons and the like. In fact, I actually saw a Discover magazine headline that said, “Beyond the nine planets.” That was a week ago. So people are still struggling with this taxonomy, even though it’s clearly not a planet. I mean, you had to have been aware of this in some sense. What kind of adjustment period do we need? What kind of outreach do we need? Even to the IAU members. The 10% who voted against the idea, who voted for Pluto being a planet.

Tyson: Well, let me make it clear. There are people who have a lot invested in the word “planet.” Odd. Because like I said, “planet” had no formal definition. Not since ancient Greece. Planet means — it comes from the Greek “planetas,” meaning “wanderer.” And it referred to the objects in the night sky, from night to night, would wander against the background stars. There were seven of them — Mercury, Venus, Mars, Jupiter, Saturn, the sun, and the moon. Did I get the seven there? Mercury, Venus, Mars, Jupiter, Saturn, the sun, and the moon. Seven. That’s an unambiguous definition. No argument there. Seven planets. Copernicus says, “Wait a minute. The Sun is in the middle. Earth is one of these objects that goes around the sun. The moon goes around the earth.” So Earth became a planet. The sun became not a planet. The moon became not a planet. And so, okay. But even at Copernicus’s time, the word “planet” did not get a formal definition. It was only, “It just seems right. Let’s just keep it.” It was not formally defined until the IAU in August 2006. I’m fine with their definition! Because it doesn’t matter to me. The word is not useful. 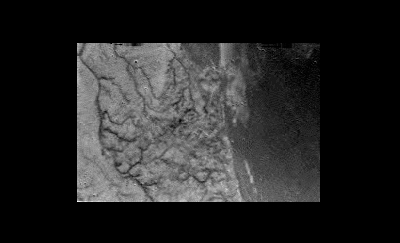 Beautiful pictures from Mars. An 8MB one was just released today, making it the highest resolution photograph ever taken of another planet.