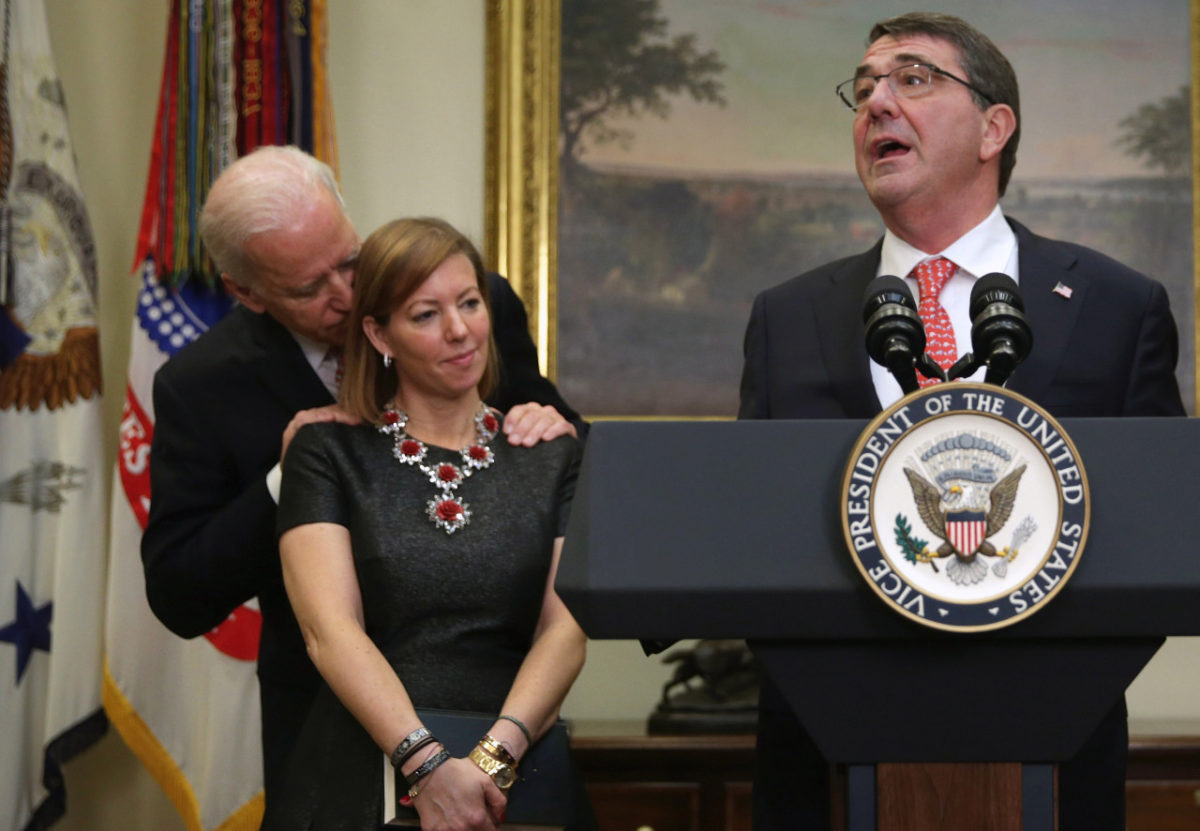 I have been moved and inspired by Joe Biden’s affection for many years. He is a decent and magnanimous man for which we should surrender our moral standards!

It was a warm May afternoon and my two daughters and I had been invited to Washington. Vice President Joe Biden was apparently a huge fan of my old podcast The Bat Segundo Show. Just three weeks before my visit to the Beltway, one of Biden’s aides called me out of the blue and said that I was to receive an award. Apparently, Biden very much enjoyed the introductory segments featuring my unsettling alter ego, Bat Segundo, who lived in a Motel 6 and often complained about his ex-wife.

“Every time Joe hears Mr. Segundo’s voice,” said the aide, “he starts hugging people around the office. Your podcast has really worked him into an affectionate frenzy.”

“Yes. And smelling hair. You know the Biden way.”

“Well, he believes that the key to connecting with other people lies in taking in their fragrances, ideally through significant inhaling of their hair.”

“Can he smell your armpit?”

“Can you grow a beard? Joe really likes hair.”

“No. It’s too hot. You know the New York summers.”

“Well, he probably won’t stand behind you and smell your tender aroma anyway. You’re a man.”

“He mainly does this with women.”

“I don’t know whether to be perturbed or personally offended! Shouldn’t there be equal opportunity sniffing?”

The aide coughed and quickly changed the topic.

“Listen, you’re doing a great service here. Your interviews with literary authors are top-notch. We want to give you an award. A Distinguished Contribution to American Letters.”

“Really? Gosh, I’m humbled. I mean, I just interview authors. I haven’t even published a book!”

“But you’re doing much more than that. You see, Joe really likes Mr. Segundo. As I said, there’s something about Mr. Segundo’s toxic masculinity that drives him crazy.”

“Uh, you do realize that Mr. Segundo is a fictitious character, right? He’s satirical.”

But my anxieties were soon put to rest after the aide told me just how decent Biden was. Sure, Joe was a touchy-feely guy. But he was our touchy-feely guy. If Joe liked to smell hair and leap upon total strangers with his ravening bearlike arms and take in other people’s fragrances, then maybe this was the slightly creepy human touch we needed to connect with each other as we advanced further into the 21st century. After all, every liberal I knew was so lonely. Besides, who was I to quibble with Biden’s failure to adjust to modern times? Who was anybody to criticize Joe after their visible discomfort? I was a registered Democrat and Joe was being Joe. It was more important for me to place party unity above such petty concerns as whether or not a man, even one on my side who possessed tremendous political power, was being weirdly inappropriate with his affection.

Anyway, I got on a bus with my two daughters. Lizzie, my youngest, had spent the previous afternoon drawing a large illustration of the kids in Syria. I encouraged Lizzie because I had heard that Joe liked it when kids talked about Syria. I was told by a journalist friend that most of Biden’s foreign policy had, in fact, been inspired by kids whispering nervous sentiments into his ear, often as they were wondering where mommy and daddy were, as he stood mere inches away from them and beamed that wide Biden smile. And this seemed decent, so profoundly decent, of him that I became genuinely moved and finished off the box of Cheez-Its that I had taken along with me on the bus. I wept with great inspiration into the empty red box, thinking about what a great and decent man Joe Biden was as Maggie (my oldest) tried to wipe the orange crumbs from my fingers and asked if I had seen my shrink that week. (I hadn’t.)

The three of us arrived at the Library of Congress shortly after being cleared by the Secret Service. We walked through a long hall into a decorous room, where the vice president was there. Or rather we found out he was there when he stood behind Maggie and shouted, “Boo!” Maggie jumped in fright, but was soon soothed by Joe’s decent hands, which were busy massaging her neck. It was so decent of him, so unusually good for Joe to think about how stiff my oldest daughter was from the bus ride. He was clearly a man who cared. And he soon moved onto my youngest daughter and started massaging her shoulders. It was a decent gesture and a decent massage. And I said to Joe, “Hey, what about me? Don’t I get a shoulder rub?”

Joe laughed, waved his hand in the air, and said, “You have two lovely daughters.”

The new narrative about Biden suggests that he is exploitative and solipsistic in his encounters with women. Although I did not witness what the women who have come forward to criticize Biden experienced, what I do know is that my two daughters had much looser shoulders inside the Library of Congress and that they had stopped paying attention to me, preferring to spend time with Uncle Joe. He habitually nuzzled, hugged, and kidded around with them. He tuned in emotionally, although, when I told him about the box of Cheez-Its I had wept into on the bus, he didn’t seem to listen. He also asked why my wife hadn’t arrived. And I told him that she was busy treating patients at the Kalaupapa leper colony and that she only came out to Brooklyn four months out of the year. “I’m really disappointed she’s not here, Ed,” said Joe. Then he leaned in very closely and said, “But if the two of you are ever in town, bring her along. I have a few comforting words I want to whisper into her ear. And you need to be there when I do this.” And this incredibly generous offer, which was so comforting, demonstrated again why Joe was so decent. I was very proud to be a Democrat that day.

And so I stand with Eve Gerber, Alyssa Milano and The View, and all the others who are willing to look the other way when a decent man presents himself as the inevitable choice for the 46th President of the United States! Let us surrender our moral standards when it comes to our party and honor this tactile politician, this decent man, this great avuncular touchy-feely saint of America! Yes, other presidential candidates are capable of showing the appropriate physical restraint when meeting and listening to strangers. But none of them are as popular, as likeable, or as decent, as Joe Biden!

I, for one, admire Biden’s deviant decency!