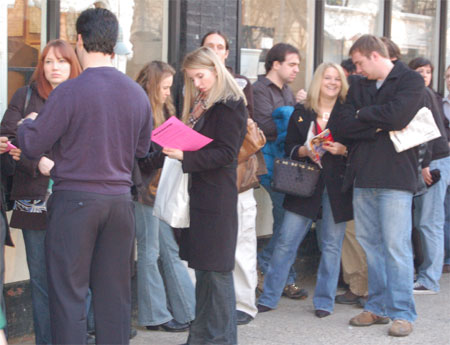 America’s troubled soul snaked around two building corners on a late Monday afternoon. It read books. It offered quizzical pikers when WGA strikers handed out pink papers containing the phone numbers and emails of eight Viacom head honchos. It took pictures of the fourteen placard-holders as if on holiday. But there were no visible signs that it was registering the hypocrisy of standing in line for a show that was allegedly progressive (and pro-union) in tone as strikers quietly expressed their rights with signs. Maybe the strikers were performance artists or buskers who had escaped the subway. I kept vigorous watch, hoping that a few audience members would feel disgusted and walk away, only to be readily replaced by those in the standby line. But they held onto their tickets like hard-won candy. 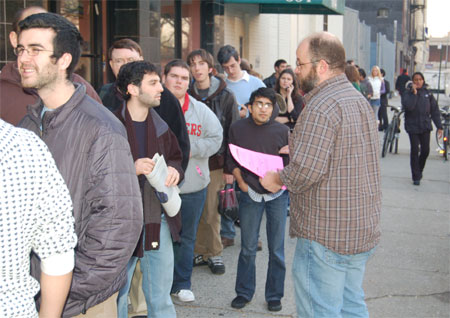 The eager audiences waiting to see Jon Stewart and Stephen Colbert lob a few unscripted bons mot about the state of politics remained uninvolved. They were there to be entertained. A bald man in his early forties disseminated circulars. He told me that the strike had been a success.

“Is it?” I asked. “These people are still standing in line.”

He didn’t give me his name and he declined to be interviewed at length. But we did talk for a few minutes.

I was interested in this man, because I had seen him trying to quietly persuade people in the Daily Show standby line, who appeared to take these flyers more readily than those who had tickets. One young man told him, “If we’re close in any way to the front, we’ll do what we can.” “Do what we can.” It essentially amounts to nothing.

To be fair, The Daily Show admitted its audiences at the pre-determined time, permitting its audience to see the WGA strike. The Colbert Report, by contrast, shuttled in their audiences well before the 5:00 PM start time so that the strikers would not be seen or, at least, endured as infrequently as possible. “What a mess!” proclaimed a plump woman standing protectively near the Colbert Report doors. She complained that there had been no progress in two months. The strikers were gnats to be swatted away on a wintry day. 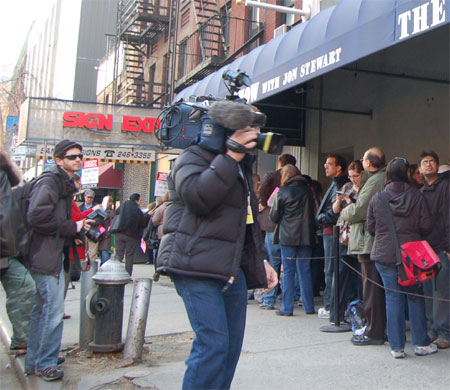 With the exception of a funny interviewer from Associated Press TV who quipped to one Colbert Report audience member, “Enjoy the show,” shortly after challenging his need to be entertained, the media was, for the most part, out to lunch. A New York Post reporter spent most of her time talking on the phone. “Sorry, I’m so spacey!” she said as she talked with WGAe President Michael Winship. The outlets who came included CNN, NY1, and me — if I am indeed an outlet.

“It’s only ten after four?” bitched one reporter. “I thought I’d been here for a day. Jesus.”

He had arrived only fifteen minutes before.

I was extremely saddened to see that nobody waiting in line really cared. There was no reaction from these audience members. No acts of dissent. The pink flyers were folded inside newspapers, deposited on the sidewalk like stray trash. Just as American audiences had chosen Leno over Letterman, despite Letterman busting his hump to cut a separate agreement with the Guild, the audience here opted for entertainment over integrity. 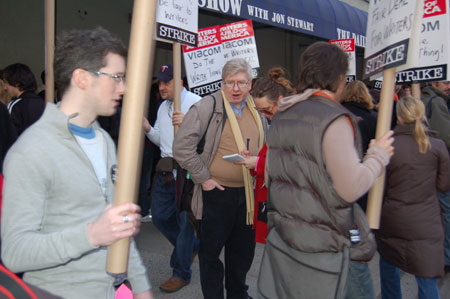 The strikers silently holding up placards circled up and down the queue, appearing to be mostly comprised of WGA members from other productions. (One writer I talked to was from All My Children. There’s a podcast interview below.) If there was a Daily Show writer in the bunch, the writer did not announce himself. I asked a few strikers if there was anyone here from The Daily Show and they told me they did not know. One gentleman declined to answer. Perhaps answering involved a confession of failure.

Since the bald flyer man refused an interview with me, I approached the WGAe publicist Sherry Goldman, asking if I could interview her. She wouldn’t talk to me on tape, snapped at me, and turned briskly away to answer her cell. I had seen her talking in front of a camera. I approached her again and said, “Excuse me. You’ll talk to CNN, but you won’t talk with me?” She then very kindly led me to WGAe President Michael Winship. I also talked with All My Children writer Kate Hall. You can listen to the podcasts below.

Correspondent: Now do you consider Jon Stewart and Stephen Colbert to be hyphenates. Are they actually, by going back to work, kind of going against the nature of the strike here?

Winship: Jon Stewart and Stephen Colbert are both members of the Writers Guild of America. They have both been given copies of the strike rules. They know the kinds of work that they’re not allowed to do. And they know that there are penalties that can take place if they, in fact, perform what we consider struck work.

Correspondent: But if The Daily Show were to show a clip in advance, if they were to design it in advance and have Jon Stewart comment on it, would that constitute an act of writing in your eyes or…?

Winship: If Jon is spontaneously ad-libbing and responding to a clip that’s on the air, we don’t consider that struck work.

Correspondent: What would you consider out of the boundaries of what he can do today?

Winship: Well, in terms of things that he can and cannot do, one of the things that he could not do is to write a monologue in advance or go on the air with material that appear on cue cards or a teleprompter.

Correspondent: Yeah. Gotcha. But anything else pretty much? Ad-libbing, he’s fine then.

Correspondent: But let’s say that there’s a guest who appears, who has like a book or something like that. He’s going to have to read it in advance. Does that constitute writing or preparation?

Winship: I don’t think reading constitutes writing. If he was writing down his questions in advance and so forth, that would struck work. But if he has a guest on the air whose book he has read and he asks questions off the top of his head, that is not struck work.

I was fascinated by Winship’s criteria about what “writing” entails. One cannot prepare a show entirely in one’s head. There must be the need to write words down. And nearly all of Jon Stewart’s clips feature those trusty blue pieces of paper. Or are these sheets mere props?

As it turned out, the January 7, 2008 episode of The Daily Show did indeed have a guest: conflict resolution specialist Ronald Seeber, presumably a friendly nod to the WGA strike. But did Stewart take notes before this interview? Did Stewart prepare his questions in advance? And if he did, is there any real way for the WGA to enforce this? 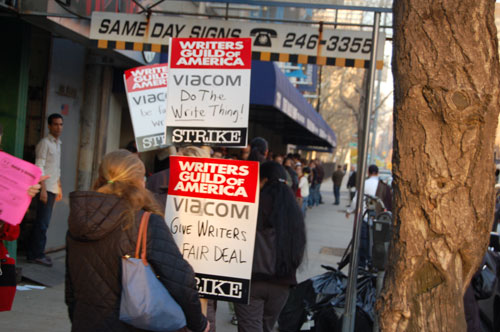 It’s also important to observe the distinction put forth by WGA. In the WGA’s eyes, Jon Stewart is not the enemy. Viacom is.

From my interview with Kate Hall:

Hall: We’re not striking The Daily Show or Jon Stewart. I think everybody here for the most part — I can’t speak for them, but I would imagine that they’re all big fans of his and the show. So we support him. We just won’t support Viacom’s decision to put him back on the air without the writers. 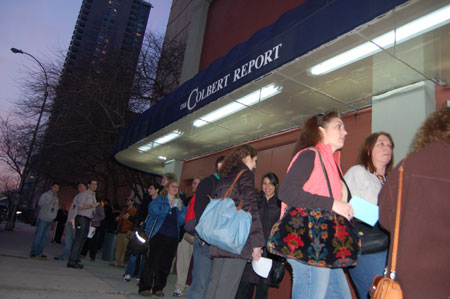 But let’s take a look at the strike rules, as Mr. Winship suggested.

Since Jon Stewart and Stephen Colbert are hyphenates, Rule 12 applies to them:

The Guild strongly believes that no member should cross a WGA picket line or enter the premises of a struck company for any purpose. Under applicable law, however, the Guild may not discipline a hyphenate for performing non-writing services. This legal restriction only extends to services that are clearly not writing services. (Emphasis in original.)

If Stewart or Colbert write so much as one word on a sheet of paper, either before the show, during the show, or after the show, then they are in violation of the agreement.

It is impossible to imagine either The Daily Show or The Colbert Report succeeding in any way without writers or a scrap of paper.

However things ended up, the moths were there, attracted to the light. Unconcerned with who provided the electricity.

(Many thanks to Sarah Weinman for assisting in this report.)