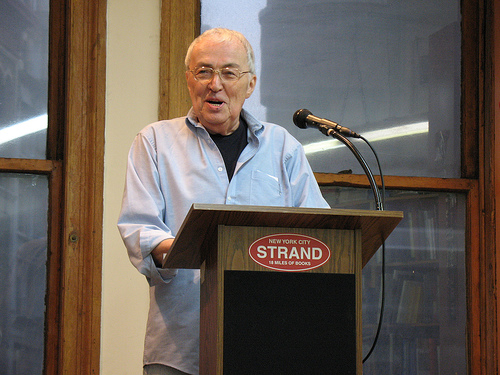 Displaying the kind of literary hubris that David Markson once skewered in This is Not a Novel (“See Professor Bloom read the 1961 corrected and reset Random House edition of James Joyce’s Ulysses in one hour and thirty-three minutes. Not one page stinted. Unforgettable!”), the New York Times‘s Gregory Cowles claims that William Gaddis’s Carpenter’s Gothic “is not in fact all that difficult. For long stretches in this book, he was less difficult even than my sudoku puzzles.”

Gaddis may not be “that difficult” to Mr. Cowles’s perception, but its probably because Mr. Cowles lacks basic reading comprehension. You see, Cowles cites Cynthia Ozick’s “Literary Entrails” (Harper’s, April 2007), claiming that Ozick “summarized the debate and insisted that whatever the merits or demerits of experimental fiction, Gaddis himself wasn’t so tough. To prove it, she quoted a lovely passage from ‘Carpenter’s Gothic’…”

Too bad for Cowles that Ozick’s original article is available online. While Ozick did indeed offer a summary for those who were spared the literary cockfight between Jonathan Franzen and Ben Marcus, the passage that Cowles quotes is the one that Marcus quotes in his article. So not only did Ozick not cite the passage that Cowles quoted, but she didn’t even write about Carpenter’s Gothic in her essay! (The Gaddis novel under discussion was A Frolic of His Own and, specifically, the Marcus-Frazen wars over that book.) Nor did Ozick claim that Gaddis was easy or difficult. Her point in chiding “the boys in the alley” is that literature should not be judged on how difficult it may appear to be, but on the merits of the text. Any side fights involving readability indices, the speed and perspicacity of one’s faculties (and penis size), and the like were, as Ozick quite rightly pointed out unnecessary.

Never mind that one believes in diversion and the other dreams of potions. If the two of them are equally touchy and contentious and competitive, what has made them so is the one great plaint they have in common: the readers are going away.

I’m sure that reading Gaddis probably isn’t “difficult” if you can’t be bothered to read correctly. And Ozick’s point still holds. So long as illiterates like Mr. Cowles wax arrogantly and inaccurately about literature, the readers will indeed go away. Fortunately, the rest of us reading passionately still have it in us to be humbled and delighted by literature. (And for the record, The Recognitions was slow going for me when I first read it in my twenties. But it was worth every difficulty.)

Ladies and gentlemen, the NYTBR has a longass review this Sunday of David Markson’s The Last Novel. I’m stunned. Stunned, I say! Tanenhaus actually devoting pages to fiction off the beaten track? (To give you a sense of how earth-shattering this is, the last reference in the NYTBR to Markson involved an episode from a tell-all memoir.) Who would have thought?

From The Last Novel:

“Reviewers who have accused Novelist of inventing some of his anecdotes and/or quotations — without the elemental responsibility to do the checking that would verify every one of them.” (69)

It looks like David Markson has another novel coming out from Shoemaker & Hoard. It’s called The Last Novel and is scheduled for a May 2007 release. Here’s a description:

In this new work, The Last Novel, an elderly author (referred to only as “Novelist”) announces that since this will be his final effort, he has “carte blanche to do anything he damned well pleases.”

Pressed by solitude and age, Novelist’s preoccupations inevitably turn to the stories of other artists — their genius, their lack of recognition, and their deaths. Keeping his personal history out of the story as much as possible, Novelist creates an incantatory stream of fascinating triumphs and failures from the lives of famous and not-so-famous painters, writers, musicians, sports figures, and scientists.

As Novelist moves through his last years, a minimalist self-portrait emerges, becoming an intricate masterpiece from David Markson’s astonishing imagination. Through these startling, sometimes comic, but often tragic anecdotes we unexpectedly discern the entire shape of a man’s life.

Only in John Updike’s universe could a person be prim about dental procedure:

?Let?s have lunch,? he begged. ?Or is your mouth too full of Novocain??

?He didn?t use Novocain today,? she primly told him. ?It was just the fitting of a crown, with temporary cement.?

Mark reviews The Curious Incident of the Dog in the Night-Time. And he also points out that David Markson has a new book coming out.

David Edelstein and A.O. Scott square off over the Biskind book, comparing it against J. Hoberman’s The Dream Life.