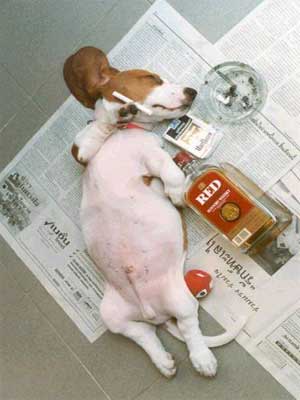 It’s become pretty hip these days to put the hate on Prozac. The drug has been accused of causing suicides, bringing about violence, of being ineffective and, most damningly, of making hipsters unable to love. Yet, even as Prozac-hating becomes a cause célèbre, it and and other antidepressants in the SSRI class are being prescribed in record numbers — and not just to humans, but to their pets. And what could be a surer sign of a decadent, wasteful and solipsistic society than putting your dog on an antidepressant?

Unfortunately, this question isn’t asked by Pretzel on Prozac: The Story of an Immigrant Dog, a book the bills itself as an “autobiodography”—a particularly weird neologism since “auto” makes me picture this dog hunched over a typewriter, wagging his angst-ridden tail between cigarettes and shots of Jim Beam. In this slim, self-published memoir, the only introspective hint on the value of giving a dog Prozac is a moment where the author hopes that the pharmacist doesn’t call out her name too loudly when he dispenses the medication; the author is clearly insecure about being judged by others on what she’s doing, but a discussion exploring why is conspicuously absent.

Pretzel, the titular dog, is described as being “neurotic” after being shuttled from South Africa to Arizona by his owners. Does Pretzel actually need Prozac? As portrayed, the dog has problems which the drug seems to diminish, problems that another dog owned by the author doesn’t have. (The other dog merely acts like a spoiled brat.) After witnessing a dish breaking, Pretzel runs scared any time the dishwasher is being unloaded. He digs holes in the backyard and refuses to come out of them. He refuses to eat whenever guests come to the house. But it’s suspicious that Palestrant (the author) spends no time at all discussing nature versus nurture. Pretzel is “just like this.” And it’s hard to overstate just how spoiled this dog is. When Pretzel runs into the bedroom at the sound of a dishwasher being unloaded, Palestrant stuffs a towel under the bedroom door to help muffle this din. When Pretzel is finicky about his food, she starts leaving five different bowls of food out every night, so Pretzel can have his fill. (If the other dog eats all of Pretzel’s food first, then five more bowls are set out.) Whenever Pretzel refuses to eat altogether for a night, Palestrant takes it to the vet to be fed intravenously. When Pretzel will not use the doggie door, instead of simply letting the dog in and out every once and a while, she is forced “to keep the doggie door permanently open for Pretzel—and for all the mosquitos, cockroaches, crickets, spiders, and scorpions wishing to enter our house. Because we allow the hot air in summer and cold in winter, we can’t conserve energy. Instead we increase the load on the heating and cooling systems and on our bank account.”

It’s hard to trust the author when she talks about Pretzel’s problems because there are levels upon levels to the anthropomorphism involved in her idea of him and of animals in general. The dog doesn’t just dig a hole and sit in it. He “wants to disappear into it and die.” After the dogs get off the plane, “immigrating” from South Africa along with the author, we learn:

A cat who falls off a table is “embarrassed” afterward. A dog seeks the “respect” of other dogs. One dog assigns blame to another dog for actions beyond their control. A dog who is dying is described: “He’d had a long life and in the end dwelled more frequently outside his body than in it. But now his re-entry visa has expired.” How, exactly, is the dog dwelling outside of its body? We are told no more. 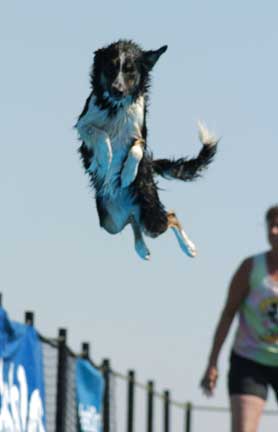 Palestrant enjoys “mentally instructing” Pretzel: “Be receptive to new ideas, Pretzel. Transcend boundaries. Try this new doggie biscuit.” At first I thought maybe the author was intentionally using Pretzel as a lens to examine her own thoughts and fears about immigrating. But nothing so subtle is going on; she is doing exactly what she says she’s doing: mentally instructing her dog. And the author appears to be writing with complete seriousness, “I enjoy communicating with Pretzel because he is a listener.”

A minor crisis comes about when the author, who had been told Pretzel was a Maltese, instead discovers he’s a Bichon. “Pretzel, I’m sorry, sorry, sorry,” Palestrant writes, talking to the dog, “I know you’ve been deprived of your essence. You’ve been what you’re not for far too long. … At least you know what you are: a Bichon and not a Maltese. Forget the past. Give yourself a second chance. Take charge of your salvation. Don’t be a Dodo-dog, Pretzel. Learn to fly. … We’ll stop encouraging you to wade in the lake, Pretzel, or cool yourself under the sprinklers.”

Pretzel is described repeatedly as being “confused about his identity” because of this.

But then, race is a very strange subject in Palestrant’s hands. Much is made of the fact that the dog and author are coming from South Africa. Early on the author writes, “We feel guilty for having been born into a country that adheres to a system of separating groups according to race. We know we must leave.” It’s hard not to insert the word “white” in between “born” and “into”, and it seems bizarre that the reason the author and her partner are leaving the country is simply “guilt”. If one really felt guilty wouldn’t one want to stay and try to make things better? If she had instead said (as I think is more likely) that they’d left the country because it was unpleasant for them to live in a place where their kind oppressed and was despised by the majority of the population, that at least would be more honest. Whatever the real reason, “guilt” doesn’t make any sense in this context.

The author prides herself on being broadminded about race and knowing that things she’d been taught in school about it were lies. However, the irony that someone is leaving apartheid because of race guilt and yet only owns purebred dogs is completely unexplored. She does say, she’s “never been dazzled by titles. Always felt that a dependency on family trees, designer labels, and on the broadcast of one’s accomplishments … are [sic] signs of weakness. … So why now, do we have four pedigreed dogs?” The question is never answered.

Indeed, Palestrant has positively Lamarckian ideas of racial inheritance, at one point wondering if Pretzel might fear water because one of his ancestors had a near-drowning experience. At another point a look from the dog is interpreted like this:

Do you know how depressed I am? Do you have any idea of the burden I carry—the collective sufferings of my ancestors?

Things get weirder when she tries to contemplate the situation in South African in relation to her dogs. She writes, “Pretzel, glued to his neuroses, is poor immigrant material as he still lives in a past that wasn’t that vast. Pretzel, accept change. Look, if your old government can finally reinvent itself, so can you.” Yes, Pretzel, your plight is just like that of South Africa.

South African dogs dominated the sidewalks during apartheid. They had terrible attitudes. Attacked passersby. Having been brought up in a society where many of the laws were difficult to respect, some dogs, like their owners, broke them.

Now that the old laws in South Africa are obsolete are people free to stroll the sidewalks, while dogs are gated?

Many, many times while reading this book, I had to stop, read the sentences again and realize I still didn’t have the foggiest idea what Palestrant was talking about. Is Palestrant actually suggesting that the dogs were biting people out of some kind of civil disobedience toward Apartheid? And now that Apartheid is over, she wonders if dogs are kept behind gates—it’s suggested that they won’t bite people in the name of Mandela?

Ultimately, Palestrant’s anthropomorphism gets really batty, as when she buys a new dinner service and shoves it unsteadily in with an old one from South Africa. When the dishes burst out of the cupboard and smash all over the floor, she reads it as her old country’s tableware physically fighting the American tableware. In reference to Pretzel’s old fear of broken dishes, she says (in all apparent seriousness), “Had Pretzel, years ago, sensed the pent-up emotions of the dishes in our cupboard?”

The truth is, I know from personal experience that SSRI drugs have helped a lot of people, and I would have really liked to read a book which explored legitimate psychological disturbance in animals and the ability of Prozac to treat it. Such a book might be very interesting.

Pretzel on Prozac, on the other hand, is less about disturbed psychology than the product of it, and something that the Prozac-haters out there could easily hold up as a clear example of everything they are complaining about; someone using medication (in this case, on their dog) because of a clear inability to address their own problems. It is an extreme example of the way that many parents want to blame anything but themselves for their child’s shortcomings; Pretzel is the way he is because he’s a Bichon, an identity-confused Bichon, an identity-confused Bichon from South Africa, an identity-confused immigrant Bichon from South Africa. Anything but because he is Ellen Palestrant’s dog. And clearly, he needs drugs.

Did Pretzel really need Prozac? Could Pretzel’s problems have been solved by being given to another owner? Or by having been raised by a different owner? We’ll never know the answer to these questions.

As for Prozac in general, one day a book will come out that neither vilifies nor glorifies it, that speaks compassionately about the people it’s helped and looks carefully at those using it for the wrong reasons. That’s a book I’m waiting for.