No doubt you are ossified and almost dead. You drink your Sunday morning coffee and it gives you, mayhaps, a few extra years of invigoration. Allow me, Chip McGrath, former editor of the New York Times Book Review and thus arbiter of some lasting quality, to inform you about this fascinating new technology called the graphic novel. That Nick Hornby kid wasn’t available. So I thought I’d take a stab at this comics thing myself. Oh, sure, you might be thinking that the funnies is kid stuff. But no! These funny pages now appear in The New Yorker! They even win prestigious prizes! It’s the latest rage. In fact, it’s drawn and authored with rage!

And, no, we’re not talking Garfield either, although I must confess that I chuckle from time to time over that pesky feline’s antics. And I’m sure you do too. When will he ever get his lasagna? Ha ha ha!

As I learned yesterday, there are actual books which feature comic stories. And not just Spider-Man, but genuine autobiographical stories. I’m so excited that I’m going to have two bowls of oatmeal for breakfast, not one!

Now you can trust your Uncle Chip when he says that this stuff might be literary and might actually replace fiction altogether. Save for that dirty man Alan Moore, who apparently specializes in nothing but pornography. After all, a tale about a randy Dorothy Gale can’t have any redeeming qualities now, can it? 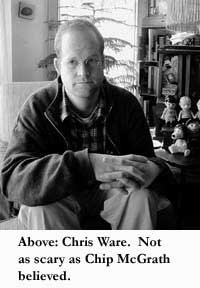 These graphic novel thingies can now actually be purchased in bookstores. I was at the Barnes & Noble the other day and was shocked, shocked I tell you, to see some nifty little book called Persepolis in the Customer Favorites section. Well, I said to myself, I guess these things are selling. So why not write an article about these suckers?

The good news is that the people who write these graphic novels are, for the most part, friendly. When I asked Daniel Clowes if he had any specific titles of his that I could plug in my profile, he came very close to biting me before deciding that the silly nature of my article was just too good to pass up.

Believe it or not, there are also chicks who draw comics too! Let me pull out McSweeney’s 13 and count the names. Yes, yes, I see. Lynda Barry, Julie Doucet, Debbie Dreschler

Granted, I’m a bit new to the form myself. But I must say that I’m impressed and I think that if you open your minds a little bit, you’ll find yourself as darn smitten by these cute little graphic novels as I was. Aren’t they adorable? Why, those little mice in Maus are almost as cute as Garfield!