I am not certain what it is about manboy slacker books and films that attracts me, aside from the fact that my 32nd birthday’s coming up and I remain very much an adolescent, albeit one with a few irons in the fire of maturation. Irrespective of my personal standing, I am sad to report that Kevin Smith’s Clerks II is mostly a dud, a graceless return to territory that Smith himself has long outgrown. It is not so much that, aside from a very funny donkey show interlude, the jokes here are clunkers. (What can one say about a film whose funniest gag is an homage to Silence of the Lambs?) I suspect that Smith doesn’t trust his instincts as a writer, or perhaps lacks the discipline to whack down the melodramatic monologues he relies upon to maintain momentum. Say what you like about Jersey Girl (and I will go on record as saying that I enjoyed that film’s unexpected sweetness), but Smith’s heart is more attuned to sincere human behavior. But like his hero John Hughes, he’s reached a point in his career where he doesn’t know how to commingle the comedy with the sap and the results feel incongruous and rushed. (Part of me wonders if Smith writes a script over a weekend like Hughes.) 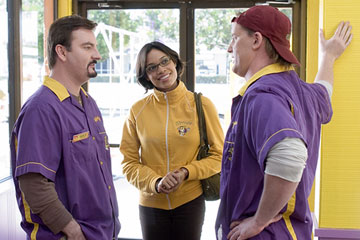 Take, for example, a scene between Dante (played again by Brian O’Halloran) and the manager he may be in love with (Roasrio Dawson, the only cast member here not mugging to the camera) on the rooftop of Mooby’s, the fast food joint where Dante and Randal now find themselves employed ten years later after their beloved Quik Stop has burned to the ground. The manager, inspired by the Jackson 5’s “ABC,” is teaching Dante how to dance for his upcoming wedding. It’s a moment in which O’Halloran’s eyes light up with wonder and we expect there to be any number of virulent emotions running under the surface: perhaps a lower brow raised in deference to Linklater’s Before Sunset. But Smith opts instead for cross-cutting to various people dancing inside Mooby’s, followed by an elaborate dance number with everyone toe-tapping outside the restaurant. The scene is a remarkable letdown, relying upon a hokey artifice that feels more at home in a 1986 episode of Moonlighting than a 2006 film.

It is Smith’s inability to pursue the import he clearly wants to depict that cripples his film. He certainly acknowledges his debts, giving Randal a David Wooderson-like panache for bedding seventeen year old girls. (Richard Linklater’s second film was Dazed and Confused.) There is an interesting twist on James Mason painting Lolita’s toes in an early scene where O’Halloran paints Dawson’s toes, implying that the two might be overgrown children in search of meaningful lives. But the cinematic riffs and the wry allusions stop there. The film feels tired. Jason Mewes, as Jay, lacks the hangdog stoner look of Smith’s first four films. There are clumsy references to blogs, indolently written comedy (Smith desperately tries to mine a gag involving Randal confusing Helen Keller with Anne Frank and it feels like a Saturday Night Live sketch gone five minutes too long), and the expected cultural fixations (this time, the Lord of the Rings trilogy).

The film is littered with MacGuffins. Jay and Silent Bob serve no purpose, other than as a deus ex machina. A nineteen year old Christian co-worker (Trevor Fehrman) is played for easy laughs. (He’s a Transformers geek, has a cell phone that he uses to call his mother in emergencies, and has a closeted side that is about as predictable as Smith once again employing static framing.) And in an act of nepotism as catastrophic as Ben Stiller casting his wife Christine Taylor in Zoolander, Smith has cast his own wife, Jennifer Schwalbach Smith, as Dante’s fiancee. She’s left to offer doe-eyed entropy when not making out with O’Halloran. It doesn’t help that she wears a T-shirt reading, “Mrs. Hicks,” which further highlights her thespic incompetence.

It has been reported that Jeff Anderson returned to the role of Randal with reluctance. The performance shows. Anderson’s energy was one of the high points of the first Clerks film: a rush of staccato snark that formed a contrapuntal buttress to Dante’s neuroses. Here, Anderson lacks the vim to pull off the balance. There is the suggestion of a dark edge to Randal, but both Smith and Anderson are wary to pursue it.

Clerks II is a desperate retread and a colossal step backwards for Smith. The View Askew universe may have been fun for Smith once, but it’s clear with this film that the cash cow moos just as loudly as the door at Mooby’s.