Correspondent: It seems very extraordinary that it was only three drafts to get this. I mean, because the prose itself, it has this really illusory speed to it, in the sense that one reads it, thinking, “Oh, well, this is a rather brisk read.” And then you introduce the detail, like the weird guy at the bar. Where did he come from? I don’t remember him being referenced earlier. And yet this often happens, in terms of [the protagonist’s[ perception. So in terms of playing with readers’ perceptions, was this very much in place early on? 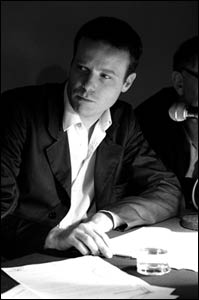 McCarthy: It fell into place really early on. I mean, as soon as the guy’s voice came, and it came early, because he’s not an intellectual or an artist. He’s just a very average — he’s a Joe Schmoe. He’s some bloke. He doesn’t even have a name. He’s kind of an everyman. As soon as his voice was there, it just picked up its own rhythm and then the set of modulating repetitions and the phrases that come back, they just suggested themselves. It’s like pinball. Once you go into multiple mode, they kind of stay up there for a bit, you know what I mean? And it just seemed to happen with this book.

Correspondent: So the momentum in this book, in writing it, came from these repetitive phrases. These incantations?

McCarthy: Yeah, exactly, there’s a sort of incantatory logic to it. A neurotic repetitiveness. And once that gets going, it kind of auto-repeats. It goes into auto-pilot mode of self-repetition. Like the classical model of neurosis in Freud or whatever. You can see that playing out rhetorically in the writing, in the text of this book, I think.

Correspondent: I actually wanted to ask you about the time period in this book. You make a few clues that it might be the late ’90’s. You have the rising telecommunications stock.

Correspondent: You have the Propellerheads song from 1999 or somewhere along those lines. You have the airport security being particularly lax. And I’m wondering why the late ’90’s time frame seemed to be the best to set this particular narrative.

McCarthy: It’s pretty much when I wrote it. I wrote it from 2000 to 2001. In fact, I finished it just about a month before September the 11th. So it’s kind of ironic. This book has been interpreted as an allegory of September the 11th or reviewed as foreign policy. The hero starts out the victim or some sort of calamity and he ends up the perpetrator of other calamities, which is kind of what the U.S. has done.

McCarthy: But it’s entirely accidental. I mean, it was all written before that. But no, you’re right. It did come out of that. I imagine that it’s set sometime during 1999, 2000, as the stock market bubble was going up and then spectacularly bursting at the end of the book.

Correspondent: Well, you even have the notion of this company, which is Time Control UK. I wanted to ask you about this. I mean, did this come about from the notion of — all you had to do in that time period was essentially write out a five-page prospectus and anyone would give you money? Or were there actually specific companies that you based Time Control UK on?

McCarthy: Oh yeah! These concierge companies were just emerging in the UK, who would more or less do anything for you. They live your life vicariously, or they stretch your life for you. Which I just find kind of fascinating. I mean, it’s quite kind of metaphysical really, you know, you outsource your godliness. You outsource your autonomy, even though obviously you’re paying them. And the stock market, I just found it really fascinating. This bubble and these companies that were just making paper millionaires out of people that had virtually no premise. Like eSolutions. I mean, what on earth is that? I read this article about the South Sea bubble of the 17th century — or was it the 18th century? — where stocks were going so high that people would throw their money at anything and there was a company called A Very Good Idea Yet No One to Know What It Is.

McCarthy: And, of course, its shares sold out in a day. And, of course, it went bankrupt six months later. But in this book, the movements of capital are very much tied in with the movements of everything else. So this idea of speculation, which has an astronomical meaning as well. Contemplation of the heavens. And my hero spends a lot of time just looking at constellations of dust suspended in a stairwell. And they’re either going up or down. And the shares are doing the same thing.

(A two-part interview with Tom McCarthy, the author of Remainder, is coming soon to The Bat Segundo Show.)