Correspondent: I’m wondering, in your research, did you find a kind of Miles-like figure who was occupying the public sanatorium, as opposed to a private one? Were there many of these types of figures? 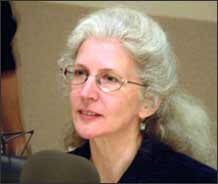 Barrett: There were a lot of wealthy people in cure cottages. I didn’t find someone like Miles. He’s really wholly invented. But the American Protective League is real. That institution that he belongs to was real and very powerful during the early part of World War I. So I really built him from my knowledge of people in cure cottages, which I had written about before in a story called “The Cure” in Servants of the Map. And then from what I found out about the American Protective League.

Correspondent: Gotcha. The sessions that Miles conducts are rather interesting because we don’t actually know all the time what’s being reported in those sessions. You reproduce a rather bland page-long sentence of some of the things that are discussed, but I found that to be kind of an interesting decision in light of the first-person plural narration, which we haven’t even begun to discuss. I’m wondering why you kept that sort of disguise. Was it a way to foreshadow the inevitable revelation as to who this narrator is?

Barrett: This collective narrator — usually when we read something that starts off with a “we” voice, we’re waiting for it to separate out into an “I.” And that is the case for most stories. This doesn’t right through the very end, and there’s a reason for that. And partly the reason is that, as a group, those people do something — or, in some cases, fail to do something — about which they feel really guilty. So they’re not willing to separate out. The reason for reproducing what they’re talking about so literally is partly to give you a sense of the real texture of their lives and what they’re really learning. There was a tendency then — and there’s still a tendency now — to think that recent immigrants to this country, if they’re working in menial jobs, aren’t educated and don’t have complicated intellectual lives. And that’s just silly. It was silly then and it’s silly now. The workmen’s circles, which is what that discussion group is based on, was very common in New York. Especially on the Lower East Side. People talked about them in great depth and with great rigor after very long days working horrible jobs about the Yiddish theater, about French music, about painting, about all sorts of things. And I thought that just to describe those things, to tell about those things really briefly, would in a sense be unbelievable. That I needed to reproduce for you some of the texture of that. So that you could fully imagine what it was like to really have those discussions.

Correspondent: I think there’s also a mystery of not discussing the full minutes of the agenda. Were there two green volumes that you actually found during the course of your research?

Barrett: I have those two green volumes.

Barrett: Yeah. I have the books that Leo works from and I know them almost as well as Leo does at this point. I don’t actually know any chemistry. But I do know…

Correspondent: Come on! Cite something at the top of your head right now!

Barrett: I can’t. I just can’t. But I could when I was writing the book.

This conversation with Andrea Barrett will appear on a future installment of The Bat Segundo Show.