Just hours before 2006 NBA finalist Jess Walter headed on a plane back to Spokane, we talked about his novel, The Zero, which he fully confesses to be an allegory of post-9/11 life. 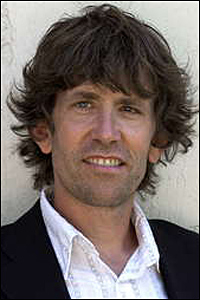 Walter: We were clinging to our economy, and the fact that our leaders — Giuliani and Bush at the time — said they attacked our economy. They attacked our way of life. And the fact that we didn’t bat an eye over the fact that they equated our economy with America, with our way of life, it was as if we had forgotten that there was some larger thing. And then, as we started debating whether or not it was okay to torture, and this lurched into a war that I didn’t agree with, it just seemed as if the conflation of victim and hero, the confusion of economy and country, were disastrous. And so, it comes out in a novel.

Correspondent: But it’s not all bad. You have, for example, the honor of the tip. The dollars constantly inserted under the martini glass.

Correspondent: So I don’t think it’s entirely a cynical view you have of the..

Walter: No, no. I’m not entirely cynical. Again, this is all — I sound so dour and political. But this is all framed in a novel that’s hopefully funny and entertaining. And I remember those ghost bars being in Lower Manhattan. I mean, I was right in the thick of Ground Zero. So you’d walk into these ghost bars and there’s no reason for firefighters not to take the bottle down and take a drink. And some of them would leave a dollar tip. Was that an ironic tip? Was that a real tip? I don’t know. But the descriptions of Ground Zero in the book. In my mind, the book starts when I arrived five days after. And so, from that moment on, it does hopefully capture everything. Some honor, some pathos, and a lot of cynicism.

Correspondent: The whole notion of Jesus being mentioned 93 times in the Koran. Where did that come from?

Walter: Jesus is mentioned 93 times in the Koran.

Correspondent: It really is?

Walter: It really is. If you think about the history of religion in our world and all these pantheistic movements, and all these animism and natural worship, to all of a sudden come up with monotheism with gods that are almost exactly the same, with some of the same prophets, but just these tiny gradations of difference — to have those cause the death and destruction of millions upon millions of people and lead us to the brink of mutual destruction over a couple of degrees, it’s another kind of insanity. These religions are so incredibly similar. And within the differences, obviously, are enough places for all of us to die and the fundamentalists are the one who cling to those differences.