Correspondent: In this title essay, you write, “Observation is my weakness.” And in the second essay, while you openly confess to stalking many of the… 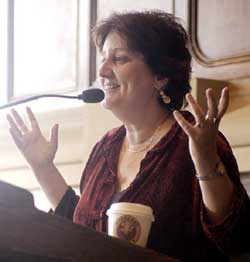 Pollitt: I didn’t mean to interrupt you.

Correspondent: Well, go for it. Go for it. I’ll jump in.

Pollitt: I was just going to say, I was wondering, if I had called that story, instead of calling it “Webstalker,” if I had called it “Googling my Ex-Boyfriend,” would people have been so horrified by it? I really don’t understand this. Maybe you can explain this.

Pollitt: This is something everybody does. And yet somehow, it’s, you know, I have been called in reviews — maybe she’s insane, why would she reveal such a terrible thing about herself, maybe she needed the money. I mean, I can’t believe it! I thought I was sort of like, well, here we all are and, in fact, in the story — in the story, I have a young friend who introduces me to this word, which I had never heard before. And she was surprised I didn’t have a whole file on my boyfriend, which she had on hers, with a social security number and everything like this. I get the feeling that there are a lot of people that are very suspicious of their mates.

Pollitt: Which I never was. All I did was I sat at my computer and I Googled. And for this, I am being pilloried as if I was a crazy person. I just don’t understand it.

Correspondent: I would think that people are possibly objecting to the fact — they seem to pinpoint precisely, like you guessing the password and wondering what it might be. And hacking someone’s email. Maybe it comes from doing casual Googling, which everybody sort of accepts. But even your friend having the social security number, well there, we get into invasion of privacy issues. So maybe that’s probably the touchy thorn that’s caused…

Pollitt: Well, you know, I hope that that story and the other ones are written in a humorous way. I not only did not manage to get into my boyfriend’s email system. It was really basically a joke. I would be the last person in the world to be figure out how to do that.

[RELATED: In today’s Salon, Rebecca Traister offers a lengthy article about the hostile reception that has greeted Katha Pollitt’s Learning to Drive. (via Bookslut)]