As regular readers know, back in the day, I made a deal with a man at a crossroads who pledged to give me a mysterious potato salad recipe (along with guitar lessons), if I would continue to reference the adventures of Jonathan Ames. Well, I’ve been doing this for quite a while. And there hasn’t been a potato salad recipe sent to my mailbox. So I thought that I would begin to take my involvement on the Ames reporting front to the next level.

Somehow, I’ve been coaxed by very pleasant people to be a part of the Craig Davison-Jonathan Ames “exhibition sparring event” (note the new terminology) that’s happening at Gleason’s Boxing Gym (83 Front Street) on Tuesday, July 24, 2007 at 8:00 PM. (If you heard about this event before, please note the new venue. Apparently, an amateur boxing law prohibiting opponents who were more than ten years apart in age from fighting forced the event’s organizers to find a new venue.)

At the very least, I hope to offer a few between-rounds interviews with Davidson and Ames for a future installment of The Bat Segundo Show. (Mr. Ames and I have been trying to get a third Segundo interview set up for some months now.) But I may also be involved, in part, with emceeing this event. If this turns out to be the case, having never announced a boxing match before, I plan to dutifully study the history of past boxing announcers and give it my all. That’s the very least I can do under the circumstances. A lot of this, of course, depends upon the organizers and my recurrent laryngitis, which is not fully recovered but well on the way to being gone.

But don’t let my dubious participation stop you from attending what is surely one of the craziest literary publicity stunts seen in some time. Here are two writers who would willingly beat the shit out of each other to promote their names. Would you go that distance? 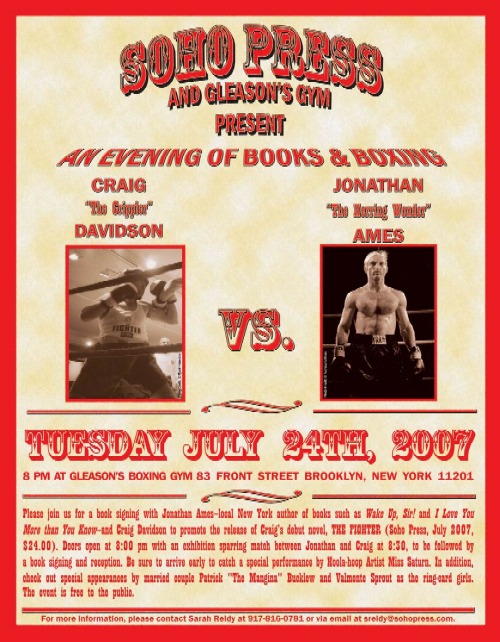