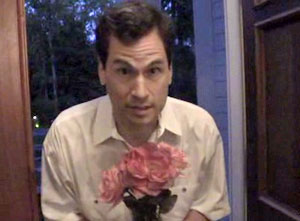 In a post on Saturday, the NYTPicker, a website devoted to “the goings-on inside the New York Times,” pointed to the recent firing of Mary Tripsas, who was let go after writing a positive column just after taking an all-expenses paid trip from 3M. The NYTPicker also highlighted Clark Hoyt’s recent column, in which Hoyt reported that the Times had “parted company” with Joshua Robinson after Robinson had “represented himself as as a Times reporter while asking airline magazines for free tickets to cities around the world for an independent project he was proposing with a photographer.”

But David Pogue’s ongoing ethical infractions were not addressed by Hoyt and, as the NYTPicker put it, “Pogue continues to keep his gig while traveling the country — courtesy of corporations who pay him to speak at retreats and confabs, identifying himself as a NYT columnist. It’s a double standard that NYT has yet to address.”

This prompted David Pogue to leave the following comment at the NYTPicker’s site:

One of them was for a corporation–ONE. It was Raytheon. And that was an engagement that had been individually approved by my editors.

(As part of the Times crackdown on this issue, ALL of my speaking engagements must be individually approved. It’s been this way since June.)

Ooooh, look at Pogue jetting around the country for big corporations!!

You just have no idea what you’re talking about.

Actually, the NYTPicker does have some idea about what it’s talking about.

Here’s the pertinent clause from the New York Times‘s ethical guidelines: “Staff members should be sensitive to the appearance of partiality when they address groups that might figure in their coverage, especially if the setting might suggest a close relationship to the sponsoring group.”

Alas, in the examples that Mr. Pogue kindly offered to the NYTPicker, the ostensible “journalist” proved quite careless in disclosing his partiality. Had Mr. Pogue bothered to investigate or research the entities he was speaking to before accepting the invitations and the honorariums, he might have discovered that there was decidedly more than one corporation here.

As its website proudly announces, eCollege is a division of Pearson PLC, a London education and media conglomerate that specializes in making educational software.

FOSE is run by the 1105 Government Information Group, part of 1105 Media, Inc., whose California corporate record can be found here.

The Society for Technical Communication is a for-profit New York corporation. Here’s a link to the bylaws.

The Educomm conference is run by the Professional Media Group. You can search here for the limited liability company record from the Connecticut Commercial Recording Division:

While an LLC is slightly different from a corporation under Connecticut law, it’s safe to say that the Professional Media Group’s structure is far from nonprofit.

So that makes three for-profit corporations and an LLC in a pear tree. That squarely puts the corporations in the plural and confirms the NYTPicker’s allegations.

In a further gaffe, Mr. Pogue claimed that the NYTPicker’s author was “David.” But in an embarrassing series of developments last September, the New York Times issued a retraction for misidentifying David Blum as the man behind NYTPicker.

According to the NYTPicker, New York Times editors and spokesmen have refused to answer important questions about this double standard in journalistic ethics, whereby Mr. Pogue continues to breach the Gray Lady’s ethical standards without apparent penalty.

[UPDATE: David Pogue has left a few followup comments at the NYTPicker, which has prompted this followup post.]