[EDITOR’S NOTE: It’s no secret that Alan Thicke is everywhere these days. Unable to get much in the way of acting work, save Alpha Dog and a few token appearances as “Captain ‘Buck’ Enteneille” on Son of the Beach, Mr. Thicke’s sage words to the American populace have been profoundly undercommunicated. Until now. Return of the Reluctant presents the first chapter of Mr. Thicke’s new book, How to Starve Your Kids Without Them Knowing, where a new and not so avuncular Thicke rails against the population cluster that secured his sitcom sinecure.]

If you’ve purchased this book from the store, you’ve got guts. And, frankly, you’re going to need a bit of courage to go through with my foolproof plan. It involves nothing less than the wholesale starvation of your children. 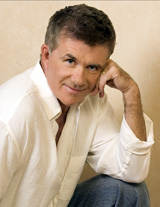 I am positive that you can go through with it.

First off, my credentials: I played Dr. Jason Seaver for seven years on the popular sitcom Growing Pains. During my tenure at ABC, I had the misfortune of working with the likes of Tracey Gold, Kirk Cameron and Leonardo DiCaprio — all of them insufferable little pricks who often tagged me as a surrogate dad. It is not an accident that these three actors all grew up to be troubled people: Tracey Gold became anorexic and was arrested for drunk driving. Kirk Cameron became an uptight Christian. And the less said about Leo, the better.

As I collected seven years of steady paychecks, whatever love I had for children disappeared with the Dohring twins the producers hired to play my baby — a last-minute casting decision when audience test polls revealed that my portrayal of Dr. Jason Seaver was not as convincing as it was in the show’s early years. This was because it becoming more difficult for me to play a caring dad with any authenticity. I loathed children then as much as I loathe them now. If you ask me, a baby is worth more on the butcher’s scale than he is in a crib, sucking financial resources with the same vigor he sucks on his momma’s teat.

For years, I have kept this secret from the public. But thankfully the cathartic act of writing permits me to tell you what is on my mind and to make a small bundle thanks to my celebrity status.

Let’s face the facts — kids are tedious and noisome little bastards who eat our expensive blocks of Gruyere and take it upon themselves to munch on our smoked salmon stash. If they were of drinking age, they’d no doubt be guzzling down our ten-year scotch. And if they were Alateen members, they’d drink it all down anyway.

America, do we really need this?

We sweat long and hard in our offices, racing home as fast as possible through rush hour traffic, only to pick up our kids from day care. And these kids then scream in our ears and demand that we feed them and spend time with them. Even if we park their butts in front of the television for a few hours, these kids still tug on our sleeves and knock on our doors just as we’re trying to copulate with our spouses.

The time has come to let these vermin starve. Why should we upper middle-class parents spend so much time and money on this scruffy population bloc? They’ll only grow up to be semiliterate thugs at best. Isn’t there an overpopulation problem anyway? Didn’t Al Gore just tell us that there wasn’t a lot we can do about global warming?

If you’re of a queasy mind set, then this book may not be for you. But I invite you to continue on to Chapter 2, where I shall explain in full all the reasons why children are best left starved and best left for dead.