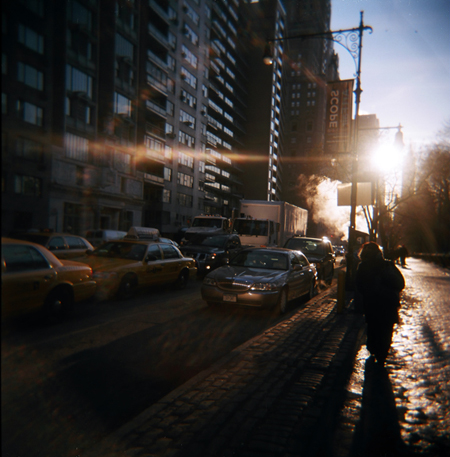 At 5:30 AM, you know who is truly fearless. Early birds shuffle into the guarded lobbies of fitness centers, jutting their chins and sticking their hands into hoodies not for warmth, but for protection against the unpredictable aperture between the end of night and the promising onset of the sun. A man rattles the locked door outside Starbucks, wanting his quick fix as the workers unpack big metal bins from the fridge and talk shop before putting on a customer-friendly face. A more subtle addict stands outside a diner with a Voice stuffed with bills and hands it over to his seller, who then hands a shopping bag filled with illegal merch, and proceeds to breakfast. Inside the diner, you can just grab the first batch of home fries and catch several snippets of the manager ordering this week’s supplies. The manager’s conversation is in Spanish and the numbers rattled into the phone reveal how his business is doing (not well). Delivery trucks rattle and stop, followed by taxi cabs, a few buses, and the odd automobile or two. Stacks of newspapers form outside newsstands and stores. Security guards are permitted to yawn. Mysterious vans pick up less secure workers at corners, where a few huddled souls begin a long day in Queens or Jersey with payments guaranteed out-of-pocket.

5:30 AM unleashes strange truths. A Duane Reade manager — a middle-aged man with an untrimmed moustache — shouts loudly about how much he enjoys hurting people just after welcoming you through the doors. It’s all about Modern Warfare 2, the latest twitch game making the rounds. He smiles as he talks of gunning down civilians and using bounce grenades to kill a crowd. Urination is more publicly practiced, but the rats are too tired to gnaw on the trash. Temporal minority groups welcome each other. The lonely chat with strangers: some demanding a response to “Good morning” and some looking for a two-minute friend. Social cues are more awkward at this hour. The lonely feel compelled to force intimate questions upon strangers in less than a minute. Requests for change carry a slight delay. No one quite knows the timing because you can’t always tell if someone’s just risen out of bed or about to head to dreamland. You can’t sit on a stoop, but you can bunch your frame near a door. In fact, it’s better that you do. The last thing you need is a property manager jostled before his alarm.

A man sans yarmulke sways in the wayward wind, singing a Jewish hymn. The smell of fresh bread careens from bakeries. The hardcore dog walking crowd, friendlier than the vigilant fitness freaks, conclude their constitutionals. A man takes his shirt off and hangs it over his head just because he can. And the normal sounds are preternaturally minimalist. Thin metal struts squeak in the breeze. The bright bus shelter signs are most visible at this hour. The signs advertise ghastly financial products and mirthless talk show hosts with rum, oversize jaws, but the messages won’t reach the people stirred up at this golden hour. Because this is the time when things are real. At no other time is the city so half-awake yet alive.