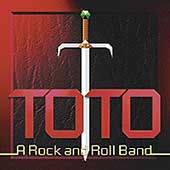 “Hold the Line”, a seminal track from Toto’s innovatively titled 1978 album, Toto, represents a rare case of restrained genius overstating the obvious. Critic Leonard Parvoo once suggested in The Peoria Journal Star that this was “a tune written, produced and performed specifically for stadiums and FM radio.” But it is worth noting that Parvoo, who communicated his unique fury over this innocuous little tune (and Toto in general), founded a Peruvian leper colony three years later. Clearly, the bile he expressed towards Toto in his review was transmuted in some small way into munificence. This demonstrates the value of Toto’s simplicity and the band’s power to change the world. For even Toto’s opponents are motivated to do great things.

But our subject concerns “Hold the Line.” Beginning with a simple snare drum snap, we are then acquainted with Steve Porcaro’s repetitive keyboard chords (thus anticipating the grand opening moments of Jefferson Starship’s “We Built This City”), which are then momentarily fluctuated in a slightly jarring beat, only to return to a traditional 4/4 beat that remains wholly uninterrupted throughout the song. This is our first clue that, while radio-friendly in nature, “Hold the Line” insinuates something more baroque. It is as if this tune represents an effort to “hold the line” on several levels, with the slight slippage hinting at a darker inconsistency. It is worth noting that singer David Paich himself is simultaneously singing while frequently pounding on his keyboard throughout the album, thus multi-tasking well before this term found usage in American vernacular. This is a truly admirable achievement — indeed, an American one. But why the unexpected introductory shift?

The answer is simple. Beyond the metaphorical elements of the song, Porcaro is holding the line musically, waiting for Paich to come in. Porcaro is determined to bang mechanically on his keyboards, despite the echoing barre chords from the guitar and the rote bass-snare backbeat. Paich’s obligation is simple: keep the listener hooked just in time for his introduction and the inevitable guitar solo. And what a rousing introduction it is!

We are introduced almost instantly to the song’s sense of fervent denial. This is then followed up with a simple guitar riff that echoes each line.

We hear the same denial, barely deviating from the previous line and sang in almost the same quasi-forcefulness. And the same guitar riff. When indeed will the transition occur? Prosody, as usual, has been maintained with a firm yet simple way of hooking the listener.

“It’s not in the way you’ve been treating my friends.”

More syllables in this line. These guys can cook! And indeed interject with a few more notes. In this way, Toto deviates from traditional stadium rock of the era, both by defiantly refusing to rhyme and ins ticking to the simple words “It’s not in the way.” And like the lyrics, we come to learn that “Hold the Line” is, musically, not like its corporate rock brethren. For we are eventually introduced to a chorus that quite deliberately offers perhaps the worst lyrics in Toto’s ouevre.

Even the most generous Toto appreciator would have a hard time reconciling “line” with “time.” There is nothing about these two words that rhymes. But then Toto is forcing us to come to terms with the remote propinquity of four-letter words. How many of us can truly rhyme on command? It’s also worth noting that the four-letter words Toto includes are not obscene. They are, in fact, quite interchangeable within the realm of everyday human vernacular.

Yet in this way, we immediately understand the initial discordant keyboard riff. For what is this but an oblique reference to Mussolini’s trains running on time? Where other bands could have employed a whistle sound effect, Toto lets the music speak for itself. The song needs no flash, save Steve Lukather’s driving guitar solo.

Will Paich offer us the full thrust of his emotions? Not here. He will save such moments for “Rosanna” and “Africa.” Here, he is concerned with how emotions are interchanged, often denuded of their primary value. His “Love isn’t always / love isn’t always” reminds the listener that this song is inherently about love, albeit love of a highly general nature.