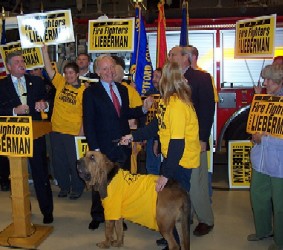 I’m likely to run naked into the streets tonight if the Democrats manage to take both houses, but the one thing that would make me laugh my ass off and wallow in the most despicable schadenfreude (and since I’m drinking tonight, I should note that bourbon does this to a man) would be to see Joe Lieberman go down in flames. There are some early signs that this may, in fact, happen.

The Journal-Inquirer: “In Manchester by 10 a.m., 5,562 voters, 18.3 percent of those registered in town, had come to the polls, officials said.” Keep in mind that 23,643 voted in Manchester during the 2004 presidential election. Now I should note that 18.3% of that little number is a mere 4,327 heads. Which suggests that, in Manchester at least, more people are concerned with this race than 2004.

The Hartford Courant is also reporting that there is a high turnout.

NBC30 reports that the secretary of state believes that this is the biggest turnout for a statewide race in more than a decade.

Whether these are Joe-lovers or Ned-lovers, it is difficult to say. It’s encouraging, but let’s not count our chickens just yet.