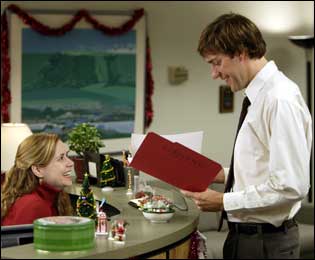 The recent one-hour Christmas episode, titled “A Benihana Christmas,” is an incomplete but strong return to form: in part because the show has found its narrative thread again, and in part because Harold Ramis directed this installment.

I’ve been truthfully disappointed with the third season. In the wake of The Office‘s success, the writers have pulled their punches, the plotlines have often become tedious (the Michael-Jan romance, in particular, although it may be taking another turn). There hasn’t been an episode yet this season with “Diversity Day” or “Boys and Girls”‘s offensive precision, with “Diwali” serving as the token “Let’s fuck with cultural fragmentation!” episode, although without impish glee or a take-no-prisoners approach. The Office‘s comic fortitude has come from an interesting social source in its American incarnation: the manner in which office life reveals class, racial and gender chasms.

The season premiere, which dealt with the gay Oscar being outed publicly at the office, was more successful in maintaining this front, but too burdened by the awkward character splitting between two offices. It seemed for a while that the writers weren’t really sure where they were going. Even an episode written by Ricky Gervais and Stephen Merchant involving an employee discovered to be a former convict felt terribly forced: in part because Gervias’s American television writing, perhaps hindered by the threat of Standards & Practices, isn’t nearly as funny as his British television writing. (See also Gervais’s flatline episode for The Simpsons.)

These doubts were put to rest on Thursday (or, in my case, Saturday morning), as “A Benihana Christmas” revealed that The Office was far from dead, shifting unexpectedly into a well-crafted farce in which two competing Christmas parties are juxtaposed against Michael reacting to being dumped by his girlfriend. “I think I’ll go to Angela’s party because that’s the party I know,” said the droll Kevin. Lines like this are laced with irony, revealing the conformist pressures of office life that all of the characters are struggling with. Is it the office environment that prevents Jim from continuing his pranksterism? And is it the office environment which causes these characters to fail in other ways? (The religion-obsessed Angela, the alcoholic Meredith, the career-stalled Ryan, and Phyllis, perhaps the least utilized character reflecting an interesting Midwestern kindheartedness at odds with what is expected.)

These social observations, which I believe lie beneath The Office‘s surface, are evident in the two waitresses that Michael and Andy bring back from Benihana. The waitresses are Asian. And Michael is too inept to distinguish between them and even applies a mark on his “date”‘s wrist to identify her. This, in itself, is quite funny. But what’s even more hilarious (and curiously unmentioned) is that these aren’t the same two waitresses who Michael and Andy were hitting up in the bar (note the blonde streak in the Benihana waitress’s hair). Thus, this nuanced racism of “all Asians looking alike” resonates even more powerfully, suggesting another story to be filled in by the audience. I also like the frilly and collared blouse that Angela wears throughout this episode, which suggests a perfervid Puritanism. I don’t know if it was Ramis who made these artistic decisions or the episode’s writers. (Curiously, “A Benihana Christmas” has no writing credit. I’m wondering if Ramis also came on board as a writer and refused the credit due to WGA regulations.) But the results succeed.

I’m not sure if The Office will be able to sustain this momentum without Ramis, but the episode demonstrates that this is certainly not a television show to give up on. It still has piss and vinegar, and there is great room for more. If it can succeed on its own social and observational terms, without employing too many stunts to appease the NBC execs, then the show’s social possibilities may just be limitless.

[UPDATE: Erin advises me that the episode was written by Jennifer Celotta. Thanks, Erin!]