I’m an advocate of alphabet soup, for many of the reasons suggested here by PBS Kids.

Some skeptics have suggested that alphabet soup is the exclusive province of children and that writers have no real reason to pay heed to this canned delicacy. But they are wrong. Dead wrong. They are wronger than Ptolemy and they simply aren’t worth your time. Don’t worry. We’re working on executing them. 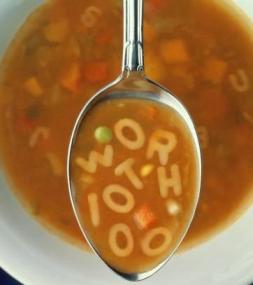 Here’s the thing about alphabet soup: it gets results. Accept no substitute. You may not know this, but every writer named Jonathan eats nothing but alphabet soup when working on a novel. You should see the inside of Jonathan Lethem’s pantry. There’s nothing but Campbell’s cans in there.

Jonathan Franzen teaches a very unique workshop in which he manacles his students’ ankles to carrels and serves them nothing but alphabet soup. If the students complain about having a story massacred by the other students, Franzen removes their laptops and demands that the student create a story using only the alphabet noodles in his bowl. This may seem a cruel form of pedantry, but results are results. This is the kind of teaching that puts them on Granta‘s radar. (It is worth noting that the Granta staff eats alphabet soup for breakfast, lunch and dinner. 365 days a year.) Nearly every student from Franzen’s program has found a job as an underpaid editorial assistant at a New York magazine and these B&T geniuses can be readily observed on a Friday night replacing lines of fine cocaine with alphabet soup that they proudly snort up their noses, no matter how scalding hot or warm the temperature.

You may recall Jonathan Ames’ famous essay about his experimental period, when he replaced alphabet soup with saltine crackers while trying to finish a crucial chapter in Wake Up, Sir! Without the alphabet soup, Ames was insufferable to his friends and family. He began to walk the Brooklyn streets, shouting verses from “Jabberwocky” at the top of his lungs and trying to discuss the finer points of Wodehouse with any stray dogs who would listen. (The most traumatic point of this period occurred when Ames believed he heard a dog say “Jacques,” in reference to Derrida, when the dog had merely barked.) But once the alphabet soup returned into Ames’ life, Ames once again found focus and finished his novel. And he never fell off the wagon.

Even editors who face vertiginous slush piles because of this relationship between fiction writing and alphabet soup can have use for it. They can pour a tureen of alphabet soup on a pile of manuscripts and, should the writer follow up, claim “they never received it.” And aside from alphabet soup’s palliative functions, what do you think they serve in soup kitchens? Rack of lamb? Alphabet soup enables the homeless to ask for more money, thus securing our great capitalist system, which clearly distinguishes between the soup eaters and the soup eater nots.

While there is a small band of literary groupies who use alphabet soup for kinkier purposes, most literary people acknowledge that alphabet soup is the one and only way to be a writer. If you’re reading this, I’m confident you understand this fact. Let us work together to crush the other writers who think they can go about this fiction writing business without soup, without alphabet noodles, and without fulfilling their patriotic duties.

[UPDATE: Apparently, the accompanying image was unwittingly stolen from this site. We will replace it tomorrow with another photo, since certain parties have informed us that their boxers are in a bunch.]