Deborah Solomon & Rebecca Walker: You’re the daughter of the novelist Alice Walker. Why did you decide to take her name instead of your father’s, who is a lawyer?

“It’s not that important for me right now. Can we talk about something else?” 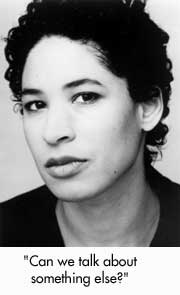 2. The Dreaded Lawyer Incident of 1998. While walking one afternoon under the bright cherry trees of entitlement, Ms. Walker accidentally collided into a young law student with a bad case of eczema. The student’s blotched skin reminded her of Jell-O, which she hadn’t been particularly fond of as a young humorless girl. But there was one horrible side effect. Any time anyone would mention the word “lawyer,” Ms. Walker would demand all parties to cease conversation. So serious is Ms. Walker’s affliction that you might be having an amazing conversation with her about the influence of dadaism upon current advertising, finally coming up with a few angles that the bright young things at Brown hadn’t tossed around, only to have the dialogue halted midway. It should be noted that earlier responses were more extreme. Two years ago, Ms. Walker used to scream on cue whenever anyone mentioned the word “lawyer.” But with the help of a therapist, Ms. Walker now calmly replies, “Can we talk about something else?” Not only does this phrasing carry the illusion of sangfroid, but it is also an homage to Joan Rivers’ infamous catchphrase (now forgotten by those nimble NYT Magazine readers who’ve never left upstate New York).

3. An appeal to those suffering from speech impediments. It’s not very widely reported, but one of Ms. Walker’s high school friends had a speech impediment. It took years of linguistical therapy for this friend to stop confusing her Ws with her Rs. Consequentially, Ms. Walker figures that the name Rebecca Walker may possess a special alliterative quality when pronounced “WEBECCA WALKER.”