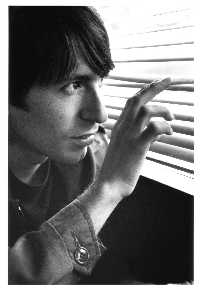 Berkeley singer-songwriter Bart Davenport is, in fact, the second scrawniest singer working in showbiz today. (I won’t name the scrawniest. I’ll only say that seeing such an exceedingly gaunt man run up and down trying to prove his virility was one of the most unpleasant stage experiences I’ve encountered in five years.) Davenport’s weight, however, should not be held against him. Because, believe it or not, he cuts the mustard. While Davenport has yet to realize that wearing three layers of clothing (here’s a hint, Bart: lose the jacket) draws attention to his disturbingly thin physique, he is, nevertheless, well worth seeing. He sells himself live with an endearingly spastic stage presence, which involves perpetually dilated eyes, a somewhat perplexed disposition, and an inveterate passion for Mick Jagger-like histrionics that comes across as unexpectedly innocous. Such was the initial impression that Davenport made on me when I saw him open for Of Montreal several months ago (where, to my surprise, he won me over after the third song); such was the impression he made on me when I saw him again for a record release party on January 29 at Bottom of the Hill.

Davenport has unveiled three albums so far. The first, a self-titled affair, signaled a man unapologetically mining the depths of acoustic 1970s rock with a 21st century lo-fi sensibility. One of the strongest tracks, “Summer Afternoon,” was a Nick Drake-inspired ballad that provided a moving transformation into subtly funky prog-rock. Drake’s undistilled influence held sway on such tracks as “New Cool Shoes.” But not to be undone, Davenport’s quasi-adenoidal voice worked in his favor for such light-hearted, drum-machine romps as “Terri’s Song.”

His second album, Game Preserve, broadened the palette with sunny acoustical work (“Sideways Findways”), dreamy straight-shooter ballads like “The Saviors” and the irresistably Van Morrison-tinged “Euphoria.” The album suggested an inveterate record listener who had somehow managed to make sense of his many influences without coming across as an outright bandit — no small feat, given the current clime of endless brother-sister acts whose work, however fresh, was hindered by the need to retain the sensibility of underground trash.

Davenport’s third album, “Maroon Cocoon,” is his most mature yet, although I suspect it’s an unintentional maturity. It offers a sharp contrast to the first two albums, while retaining autobiographical aspects that Davenport may not be in the know upon. He has clearly been raked across the coals because of a bad relationship. But where this would prove a bane for other artists, with Davenport, it allows him to expand his influences into unexpectedly intimate territory. Accompanied by curiously androgynous roommate/longtime bandmate Sam Flax Kenner on saxophone and recorder, Davenport succeeds with a scaled back sound. Aside from the unfortunate track “Sad Machine,” on the whole, Davenport’s lyrics suggest a man defiantly avoiding growing up. “Paper Friend” is a beautiful yet painful ode to a woman just outside Davenport’s grasp, while “Clara” represents the futility of identifying with a lover just beyond one’s existential reach.

On January 29, nearly every track on “Maroon Cocoon” was performed live. Davenport was stunned to see the audience reduced to quietude. (And, in fact, violence nearly broke out as two drunken oafs talked and were shushed with threats as Davenport bared his soul through “Paper Friend.”) I suspect that Davenport doesn’t truly comprehend the emotional cadences of his music (which explained his mystified reaction). But part of the fun of seeing him live is wondering just how Davenport will develop, while silently wondering if the emotional resonance of his songs will scar him in permanent ways.

If you’re interested in catching Davenport before it’s “too late,” he’ll be playing at Cafe du Nord this Saturday, February 12 (along with the groovy opener Call and Response). It’s definitely one of the best $10 shows you’re likely to find in the San Francisco area this year.