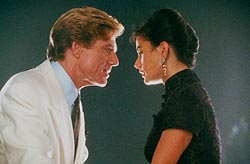 Director Adrian Lyne announced that he would be directing a followup to his 1993 film, Indecent Proposal. Robert Redford and Demi Moore have agreed to reappear. Set ten years later, Redford will reappear as the millionaire — this time, having moved to Pennsylvania Avenue. Moore’s character has divorced Woody Harrelson, changed her name to Armstrong Williams, and become a journalist.

REDFORD: There are some rumors on the Internets that ten years ago, I offered you $1,000,000 to sleep with me.

MOORE: Well, you did.

REDFORD: Christ, Karl did all he can to cover up that missing year. I thought he brushed this one up.

MOORE: You weren’t particularly good in bed either.

REDFORD: Ssshh! Lower your voice! Do you want Laura to hear? I keep sending the twins in there with more books so’s I can meet with you.

REDFORD: What will it take to shut you up? I mean, this kind of thing worked for Ted Kennedy.

REDFORD: But what do I get in exchange?

MOORE: I’ll promote the No Child Left Behind Act.

MOORE: And it has to be tax dollars. I figure the way you’re throwing money around, nobody will notice.

REDFORD:MOORE: You’ll just have to learn to live without it. You’ve got lackeys for that.

REDFORD: Alright. Take this slip down to John Snow. Ask him to file it under petty cash.