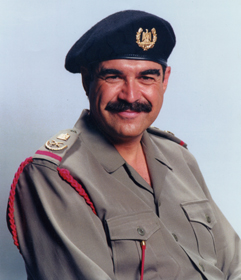 Actor Jerry Haleva, who portrayed Saddam Hussein in several comedic movies, was accidentally executed by federal authorities this morning. Mr. Havela proved so convincing in the role of Saddam that he was arraigned and executed before most Americans had their breakfasts. But a telltale birthmark on Haleva’s thigh revealed that the cops had the wrong man.

“We really thought it was him,” said Department of Homeland Security spokesman Harold Himmler. “But no biggie. We’ll be able to clean this mess up. Lack of due process hasn’t stopped us before.”

Hollywood has responded to Haleva’s untimely demise by writing and editing out political references from all forthcoming projects and blacklisting any actors who even remotely resemble political figures.

But it is now generally assumed that America is safer.