I suppose I could blame Jonathan Ames for missing a good chunk of Saturday’s Chinese New Year Parade and the Valentine’s Day Pillow Fight at the Ferry Building. But that really wouldn’t be fair because, in at least one case, I was blissfully unaware of the limitless events happening in my own city. Besides, I’m a grown man responsible for my own actions. Or so the theory goes. And if I was idiotic enough to ignore the Laughing Squid list for a week, then Jonathan Ames is not to blame. In fact, he should be commended for confusing me. We can never be confused enough in life.

Needless to say, on Tuesday night, an evening that what was referred to by at least one friend as Drink Without Guilt Night, I certainly wasn’t the only one at the Booksmith. Some 55 people showed up, many of them arriving late because of a stunning rush hour power outage at Montgomery Street Station and MUNI’s regrettable failure to provide rush hour buses in lieu of subway. Many of them were, in fact, couples. One couple I talked with revealed to me that they were there because Ames’ essays might unite them together for effective copulation. The power of Ames’ work knows no limits. Lust conquers all. 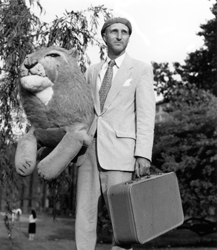 Just before the reading, I said hello to Ames. I was glad he got a chance to see the On the Road MS. upon my recommendation. I asked him if he had been frightened by Peter Coyote’s disembodied voice, but he had to dash off. As it turned out, he had a lot to prepare for. Thomas, the Booksmith’s event coordinator, pointed out to me that Coyote had been one of the Diggers. I knew this, of course. But I didn’t think he would understand where I was coming from: namely, the notion of having Coyote’s voice interrupt you as your awe and concentration is devoted to the roll. Coyote’s voice can be unnerving at times, particularly when it is turned up loudly through a small television speaker and resonating in a room without windows. I suppose this is why he is used for so many documentaries, voiceovers and commercials. So I foolishly remained silent. I am shy and avoidant that way sometimes.

The event began. Ames was introduced. And he expressed his hope that, after the reading, “things will become more amorous.” He then offered an explanation on the I Love You More Than You Know cover controversy. Ames had previously concluded that the world can be divided into two groups of people: those who like scatological humor and those who don’t. The cover had revealed a second dichotomy: those who believe that Ames is revealing his testicle and those who believe it to be a shadow. Ames is currently taking a poll among his readers about this and the details can be found here.

Ames then unveiled an oral version of his tale, “I Called Myself El Cid,” which can be found in the latest book. This essay concerns an unexpected fencing triumph in Ames’ youth with an ending that I shall not reveal. Ames delivered this with considerable animation, adopting a slight Shakespearean tone and seizing a pen in his hands as a surrogate sword. I could definitely see such brio could be used to win a sword fight. It was now being used to tell stories.

The oral story was received with great applause and Ames stopped to catch his breath, reading “Club Existential Dread” in the vocal timbre that I’d style Jonathan Ames Mode 1. Mode 1 is a slight sophisticated Anglicized inflection that I thought had been confined to his fiction, but apparently applied across the board. What was interesting to me was that the part of this essay that I had always found particularly interesting, the moment where five girls are lying on a bar, was rejoined with a kind of silent horror. Could Ames really be reading this in public? I suspected that Ames sensed the same problems with tone that I did, because he later suggested to the audience that there were parts where, contrary to expected responses, one was not expected to laugh. I can only chalk up this audience response confusion to the fact that we were assembled in a bookstore on Valentine’s Day.

Just before reading “No Contact, Asshole,” Ames was perturbed by the presence of a small child in the audience. Upon getting sanction from the mother, he read this and followed this up with “The Thick Man.” During the latter piece, Ames apologized, mid-read, for being so modifier-happy with female anatomy, noting that “Sometimes it happens when you write these things.”

There followed a session of Q&A.

There was a question that wasn’t really a question about Ames appearing on Oprah about the truthfulness of his work. Thankfully, Ames’ response was brief. Something to the effect of “I don’t think so.”

Ames was then asked if he was happy with his current book tour. He said that he was on this latest tour, largely because Nextbook has already coaxed him away from Brooklyn and he persuaded the publisher to chip in for a few more cities along the way. He pointed out that authors were never completely happy about their book tours, in large part because they genuinely believed that the publisher never provided enough PR. But he did note that the chip on his shoulder had grown smaller over the years.

Ames had received many interesting things from readers along the way. An offer from a transexual escort, the like. But at the Seattle reading, Ames had received a comic called “Things Are Beautiful,” a small chapbook bound in red string. (Unfortunately, I have not been able to find any trace of this online.) Ames had been delighted with the first 10-12 pages, in which various objects were declared beautiful, with accompanying text. But after this, things took a turn for the worse. Ames encountered a pair of glasses, with the words, “These glasses would be elegant…” He turned the page, only to see a picture of a bald man that looked suspiciously like Jonathan Ames himself. The text then read, “…if I hadn’t ripped your eyes out like Oedipus!” Ames wondered if there was a subconscious message. After all, he was bald and this illustration closely resembled him.

Since I had forgotten to ask Ames (a second time!) when I interviewed him, I asked him about his use of exclamation marks. He simply stated that he wasn’t against them and that he didn’t understand why people are told not to use them. He mentioned Graham Greene’s use of colons.

When asked about whether he included “everything” in his nonfiction, Ames pointed out that he was not a polymath. He name-checked David Foster Wallace, pointing to these “great folders” (i.e., the footnotes) that DFW had a tendency to open up in his essays. He openly wondered why DFW was wasting his time in fiction when he could be working for the government.

The last time Ames had come through the Booksmith, he had stripped down to his waist to display acupuncture cupping marks. Given this and the testicle issue on the cover, there was a question then implying whether Ames was some sort of subdued exhibitionist. Ames revealed that the current cover came about because of a photo shoot. The boxer photo had not been used. The original book cover had “I Love You More Than You Know” displayed on the back of a flasher’s coat. Ames was appalled by this. Flashers weren’t exactly strong selling points.

During the writing of I Pass Like Night, Ames had used his father’s boss’s name during one of the drafts. His father was paranoid about this. After the book was released, everybody in Ames’ family went to family therapy. And yet with his father in the audience as he performed on stage, his father had laughed when other scatological revelations had been revealed.

Ames then performed a hairy call and bid the audience good night.

An unexpected errand prevented me from staying. And since Ames was mobbed, I didn’t get a chance to say goodbye. (Sorry, Jonathan!)

But on the way out, I ran into Steve Rhodes, who had snapped a good deal of photos during the reading. I’m hoping he’ll post some of them in the not too distant future.

There’s also another Ames Segundo interview in the can that I hope to get up in the next week or so.