Longtime readers know that many years ago, I opened an envelope in my mail that contained a hastily handwritten letter and a small, poorly Xeroxed photograph of Ed McMahon. Unlike other mysterious envelopes that came in the mail along these lines, I was not promised millions of dollars. Indeed, money was never one of the promised options — at least not immediately. But there was the promise of a mysterious potato salad recipe and guitar lessons. Both of these promised to be of a very special nature that would win me friends, further my career, and earn me more invites to BDSM parties than a teenager’s libido could possibly handle. The latter was a particularly ideal prospect, because, as the letter put it, the party invites would mean getting the opportunity to place many local political figures in sexually humiliating positions. 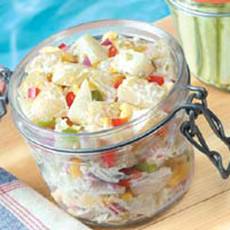 For all this to happen, all I’d have to do is meet a thin, cadaverous man at a crossroads and continue to mention any news involving Jonathan Ames on these pages. Well, I showed up at the crossroads in question. And the man never showed up. But being a man of my word, here is the latest piece of Jonathan Ames news.

A few years ago, Jonathan Ames did not meet a man at a crossroads and, to this very day, does not know how to make potato salad. But he did shoot a TV pilot called What’s Not to Love? And Showtime will at long last be airing this on Tuesday, December 18th at 11:30 PM, as well as on Showtime Showcase on December 19 at 1:25 AM and Showtime Too on December 20 at 4:30 AM and December 26 at 3:15 AM.

In other words, Showtime has decided that the ideal audience for Jonathan Ames’s pilot are speed freaks and insomniacs. So if you don’t have a sleeping problem or you’re not sitting on a Sudafed stockpile for ideal home brew, be sure to set your TiVo options if you have them!