I am in Madison, Wisconsin. I will have more to say later, which will likely ruffle a few feathers. Nevertheless, the truth must be reported.

It is safe to say that there is more here than cheese. Madison is a pleasant place.

The people, however, tend to drive within the speed limit rather than with the flow of traffic. Or, rather, they are more committed to being good citizens instead of being good drivers. This is problematic if you happen to be a California driver and you are used to the Andretti-like manuevering of Angelenos.

Madison’s downtown makeup, a thin rectangular isthumus nestled between two pleasant lakes, reminds me very much of Berkeley’s, except that there is a giant capitol in the middle, it’s 40 degrees out, and, in certain areas, there is a greater whiff of provincial self-absorption in the air than Cole Valley or Union Street. But, for the most part, it’s a pleasant town gleefully at odds with the state of Wisconsin. If one can judge a city by its park benches, as I often do, there are quite a number of them here, often perpendicular to gushing white bus stops and other monuments suggesting an unwavering commitment to environmentalism. This suggests a city of little crime, as benches are often the first thing to go when fighting riff-raff.

I listened to an interesting conversation among two desk clerks mystified by the concept of the beef shawarama. And I have done my best to corrupt some of the Madison locals with recherche banter.

Concering BoucherCon, as a literary outsider looking in, I will have quite a few things to say about it. But the below photo communicates the general atmosphere: 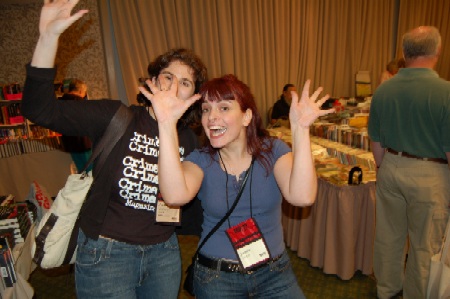