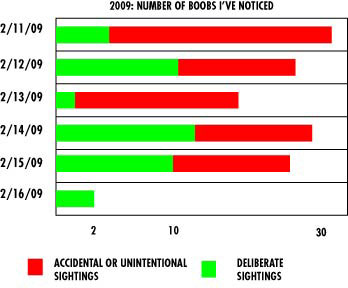 This above graph continues our very important series, Meaningless Infographs, in which various infographs, often of a personal nature, are presented to the public in an effort to demonstrate that blogs can present just as much meaningless data as newspapers. Now here we have an infograph with some very disturbing information. On February 16, 2009, the subject stayed inside most of the day. He had work to do. We can aver that the two boobs he noticed were likely someone close to him and permit other scientists to draw their own conclusions. However, we also know that the subject stayed inside for most of the day on February 15, 2009, save for a few errands that he had to run, which entailed leaving the house. Apparently, while the subject ran those errands, he went out of his way to deliberately espy boobs. What accounts for the discrepancy? Is the subject a sexist pig? Or is he merely a red-blooded male who likes boobs? Is it possible that the subject was somehow surrounded by too many boobs, thus causing an unexpected spike in boob sightings?

The data that most confounds our scientists is the set for February 13, 2009, in which the subject deliberately noticed one boob, but not two. Is it possible that the subject observed one pair of boobs, deliberately glimpsing one boob while accidentally or unintentionally glimpsing the other? Is this the lustful answer to continuous partial attention?