New emails have arrived and this post serves as an addendum to the previous report. First off, I should note Kassia Kroszer’s quibbles, which led to this report from Joseph Weisenthal, who pointed out that the only way one can access blogs through Kindle is through the page-flipping option. There isn’t the ability to scroll. (There is, however, a built-in browser — something that Weisenthal describes as “fairly clunky and prone to error messages.”) Then there’s Levi Asher’s thoughts: “They have got to be insane.” Levi insists that nobody will buy the Kindle at the $400 price. And I suppose we’ll have to wait a month or so to see if the momentum breaks down faster than the Segway. 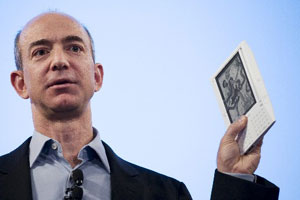 Howard Rheingold, the man behind Smart Mobs, was likewise a Federated Media participant, and insists that Amazon won’t be preventing anyone from getting the feed for free. He views this as “an interesting experiment.” John Jantsch of Duct Tape Marketing negotiated a private agreement with Amazon, but sees this as “integrating and creating without judgment. The market does a pretty good job of that.”

Kevin Aylward, the publisher of Wizbang, sees the licensing deal as “no different than the type that Yahoo has done for other blogs’ content. It’s specific to the Kindle device. As far as I know there is no other way to access our RSS feed from that device.”

Nevertheless, two additional bloggers have witnessed their content redistributed and sold with neither permission nor remuneration. Mr. Faded Glory, the proprietor of High and Tight, tells me that, “I have never been informed of what the Kindle system is.” Glory does not profit off of his work and he doesn’t “want others to do so at my expense.”

Then there’s Jason Avant of Dadcentric, who faced a different scenario. Avant had been with Federated Media, who, as we have established, had been approached by Amazon for the Kindle experiment. Avant signed off back in April, “then promptly forgot all about it, and thus was surprised to see DadCentric listed among Kindle’s syndicated blogs.” But Amazon did have his permission, albeit in backdated form.

I still was a bit miffed, as I had ended my agreement with FM about two months ago. I did contact FM about that, and they have informed Amazon that I’m no longer with FM, but am entitled to any revenues that are generated via DadCentric. I’m in the process of determining what that means, and frankly I haven’t decided whether or not I’m going to continue with the whole Kindle deal.

Avant has no plans to endorse Kindle on his site, but he does “wholeheartedly agree that Amazon should be sanctioned if they have used people’s blogs without express authorization. There does seem to be a bit of that going on, and that is certainly going to determine whether or not I continue to do business with them.” Avant has requested Amazon to pull Dadcentric from their list of Kindle feeds. We will have to wait to see if his request will be honored.

So beyond Amazon angering bloggers by appropriating their content, consider how poorly such a tactic reflects upon them as a business. Consider how this great opportunity to present an alternative revenue stream is overturned by an inability on Amazon’s part to cross their Ts. When taken with the failure of Amazon to inform major rollers like Glenn Reynolds of the new developments, it seems that Amazon may very well care more about Amazon.

I have a few emails into Amazon to get their thoughts about all this, but, since it’s Turkey Day Week, I suspect I won’t be hearing back until next week. Nevertheless, I will determine who the primary contacts are, so that the four bloggers (and anybody else Amazon attempts to shanghai) who saw their content used without their permission can have some means of restitution.

[UPDATE: Jason Avant informs me that Amazon has removed Dadcentric from the Kindle directory.]