GEORGIA (AP): Defying reports that he was the blandest and least exciting man to head the United States in its entire history, President Bush demonstrated a newfound virility during the final moments of his five-day tour through Europe. He hit the town with Georgian leader Mikheil Saakashvili and, at one point, even called him “Mickey baby.” Mr. Bush’s playfulness continued to surprise experts, while others pointed out that this came hot on the heels of Mr. Bush’s impromptu hopscotch game with Vladimir Putin earlier in the week. A White House spokesman said that these relatively new qualities were unfurled in the interests of international diplomacy, part of a long-term plan to show “a kinder, gentler Bush.” But Mr. Bush still shows no signs of backing away from his unilateral policy even a tad. The playful Bush is “the closest compromise you’ll get.” 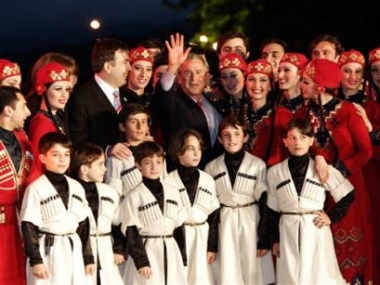 “I didn’t know he had it in him,” remarked Mr. Saakashvili, who led Mr. Bush and several dignataries in a “chugging contest.” Reportedly, French President Jacques Chirac, accompanying Mr. Bush on his way back to France, was the loudest to chant, “Chug! Chug! Chug!” Referencing the infamous fried potato fiasco from years back, Chirac added that he hoped Mr. Bush might “chug for freedom.”

The President refrained from chugging beer during the ceremonies, which disappointed the delegates from the Czech and Slovak Federated Republic, who had hoped that Mr. Bush might demonstrate his flair with pilsner. Bush stated that he had given up alcohol several years ago and that “the wife would kill me” if he so much as picked up a bottle. But he gulped down more than a gallon of Gatorade in one go, pointing out that Gatorade was “made in America.” When Mr. Chirac pointed out that Quaker Oats Co. had outsourced the jobs six years ago and that even the trustworthy X-Factor filling the keg was bottled by an emaciated seven year old, Mr. Bush responded with silence.

The high point in Georgia came when Saakashvili attempted to show Bush how to folk dance.

“Well, why not try dancing with one of these nice people in red hats?”

“That’s adultery!” cried Bush. “The only dancing that God and I recognize is that between husband and wife!”

Saakashvili appeared confused and then began dancing with one of the cute red-hatted girls. Bush sat the round out, but hinted that he “might join in next time.” On his way out, Mr. Bush slipped one of the white-robed boys a business card to a Roman Catholic priest who might “help in times of trouble.”