Okay. I’ll confess. Every so often, in a moment of weakness, I’ll jump for something based off of a cover.

EXHIBIT A: The cover of The Bells Are Ringing. This was added to my DVD rental queue because, aside from the strange combination (well, to me anyway) of Judy Holliday and Dean Martin appearing in the same film, who can resist the image of Dean Martin kicking his leg into the air while Judy Holliday is slightly insocuiant about it? I’m telling you. Legs kicking in the air! It’s my downfall. 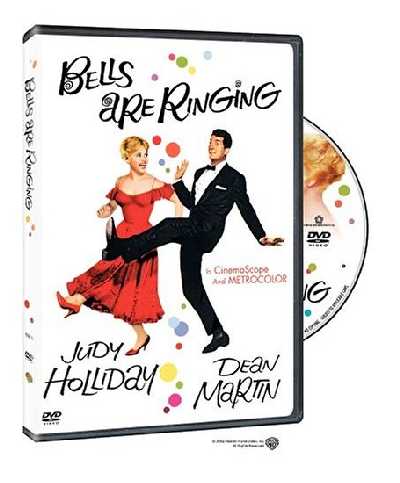 Yes, I have a kicking fetish.

I should also point out that as a kid, I had an obsession with the Rockettes — in large part because I always associated them with kicking. Which either makes me extremely gay or just plain deviant.

When watching football, I think the punter is the most impressive player. Or at least, I’ve always thought that he does the most work. Because the arm is far more precise, whereas the foot is not. Even if he is a microscopic dot from really bad seating, you’ll always see his leg in the air without binoculars. But a quarterback’s snap? Not always.

My favorite moment during a crime drama was always when they kicked the door in. And the thing that most impresses me about horses is when a horse somehow kicks down a stable door, or when a horse proves to the foolish human trying to tame it that it is the master by whinnying and standing on hind legs.

It’s my firm belief that people should kick more. Or at least realize that their legs are good for a lot more than walking or running.

Leaping, of course, has some acceptance in our society. But kicking? Not so much. It may, in fact, have something of a stigma attached to it. Likely because kicking is considered more of a threatening physical action rather than something which permits excess energy to be happily applied to the leg. In fact, why permit kicking to remain in its default emotional setting? Kicking can be joyful, artistic, and just downright goofy.

The solution here, of course, is to get all happy kickers together in an arena and demonstrate to the world that it’s okay to kick from time to time. There’s no shame in kicking. And yet even sex manual authors sometimes overlook the kick’s possibilities.