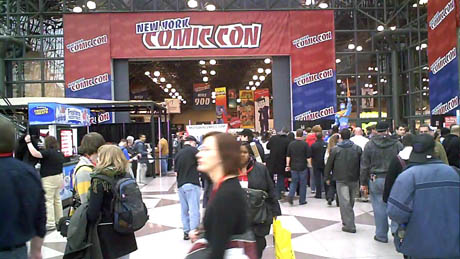 The Jacob Javits Convention Center has become a cold and noisy place. Colder than the wind pushing up goosebumps outside. Noisier than a pleasant gust whisking you into a possibility. Designed no longer for fans to evince their passion, but for passion to transmute into savage and lonely transactions. One emerges out the doors with a sense of fatigue, an exhaustion caused not from the disgraceful sensory overload, but from the sense that the people now running New York Comic Con are working as hard as they can to squeeze out the remaining social opportunities. The few moments left that aren’t dominated by vicious consumerism. In three years, the bleak cacophony of New York Comic Con will come close to rivaling San Diego. A place where the fans and the passionate are squeezed out. This was the first year with a VIP entrance in effect. Perhaps because a few filmmakers had to stand in line like the rest of the apparent rabble and bitched that they weren’t given the diva tribute.

I come to these conventions because I’m on the lookout for the people I don’t know about. The ones who still pencil, write, and create with a giddy thumping heart. The ones who, in turn, galvanize others to get excited about this art poorly regarded by the elitist snobs. While I conducted a few interviews today, this year, I found it more difficult to find those independent artists sitting in booths on the fringe who made crazy and often dangerous comics because they simply couldn’t stop themselves from creating. These endearing stalls of past years have been largely replaced by retailers hoping to hawk their overpriced goods: ponytailed mercenaries selling lightsabers who smile at you not because they love Star Wars, but because they hope you will hand over your hard-earned dollars in this rough economy.

Should you wish to touch the hem of a C-list celebrity in the autograph line, you will have to hand over one mandatory dollar to the Comic Book Legal Defense Fund. All in the spirit of generosity, you see. But who pays for these celebrities to sit behind the table? And why is poor Lou Ferrigno there for eight hours? Is this really the way for him to connect with fans? 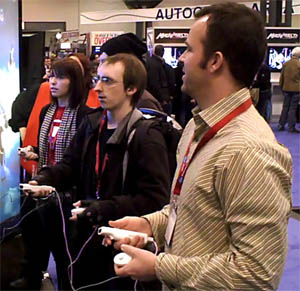 “New York Comic Con” may be something of a misnomer. Almost a third of the floor is now dominated by noisy and intrusive monitors promoting loud and distracting video games. I’m not against video games. But I am against this needless intrusion on basic communication. I was at the Tor Books booth today talking with a number of nice people, and we all were forced to shout at the top of our lungs just to be heard. What is this? E3? The fans, of course, play alone. And just watch their faces. Caught in the glowing rapture of a next-generation game engine. But can’t they play this stuff at home nine months later when the title gets released? And why aren’t they talking with each other? Who did they come with? Why aren’t they meeting other fans? Is the primordial fire that compelling? Will they sign their names to some mailing list to be bombarded by promotional material?

As someone who has gone to numerous conventions and met up with geeks who want to show me things that mean something to them and crack a few jokes, and use this as a starting point to talk about other topics, why on earth would such a vital social component be extirpated? Well, geeks, as we know, are now the mainstream. Never mind that you happened to be a geek simply because you had geeky interests and that you could care less about whether it was the hip thing. Never mind that you congregate in meeting halls and basements over beer and pizza and pot to get excited about Bryan Lee O’Malley or Battlestar Galactica. Never mind that you even filked every now and then. You are, in the eyes of New York Comic Con, a consumer. So why bother to connect? Why even bother to talk?

There were Stormtroopers and Predators and Darth Vaders and Super Marios, but none of them talked. If they noticed you, it was because they hoped to be photographed. To have their costume captured for ephemeral posterity. But where was the theater in all this? Where were the geeks who got excited and boomed their voices and acted out characters and poked some fun at their obsessions? How indeed do these folks convene?

With their wallets. With their demographic status.

But with the VIP entrance and the autograph lines, they’ll always be second-rate. They’ll always be consumers to be gouged. They’ll always be rabble. This convention is no longer about them. It’s all about the money floating around at the top. And if you ain’t got the money, well, frak you. But for $25, you can walk away with a FRAK ME T-shirt so that you know just precisely where you stand. After all, every getaway requires a souvenir.