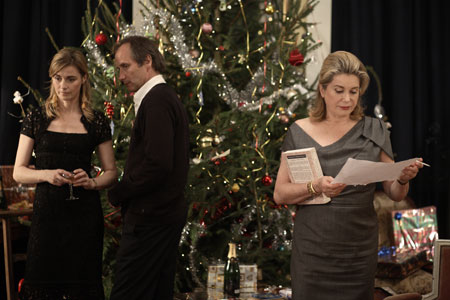 [This is the third part in an open series of reports from the New York Film Festival.]

Arnaud Desplechin’s A Christmas Tale, despite its wintry title, is more A Midsummer Night’s Dream than Shakespeare’s Sicilian family saga, and the propinquitous tipoff here involves the 1935 film adaptation with Olivia de Havilland playing on a television set. However, at one point, a character informs family patriarch and dye manufacturer Abel Vuillard (played by the gravely-voiced Jean-Paul Rossilon) that his cologne makes him smell like Italy. The film is set largely over the course of four days, as fractious family members gather for the Christmas holiday. Desplechin’s film then is something of a cross between Home for the Holidays and Gosford Park, but without the former’s more pronounced domestic nightmares and the latter’s chessboard approach to unexpected connections between people. This is more of a light drawing room comedy, but avoids Noel Coward’s witticisms and, thankfully, manners. One keenly follows these many characters over the course of two and a half hours and feels, at times, as trapped as the family, contending with Desplechin’s dissolve-happy transitions and some wildly melodramatic backstory.

To wit: Catherine Deneuve plays the matriarch, Junon Vuillard. But unlike the Sean O’Casey play, this Junon does not work. Her drama involves a genetic condition that will lead to an early death. And a question is posed over which family member has the compatible bone marrow that will offer her a few extra years of life. (At one point, the family gathers around a blackboard, ferociously scribbling the mathematical odds with transplant or without.) Will it be the hard-drinking and prodigal son Henri, fond of getting into fistfights with in-laws and climbing outside windows jut for the hell of it? Or will it be grandson Paul, a mentally troubled teenager who sees random images of black dogs?

I’m making this film sound wilder than it is. If anything, the film could have used more hallucinations and more eccentric characters to round out this family. The manic-eyed Matthieu Amalric, who plays Henri, nearly steals the film. And because of Henri, the surrounding characters, such as a quietly tortured painter named Simon, never really get a chance to breathe. One suspects that Desplechin doesn’t entirely trust the natural impulses of his characters. Aside from the aforementioned dissolves, he regularly has the camera iris closing in on characters, much like the old silent films, and inserts homages to Vertigo and Pulp Fiction. While I realize that the French are more adept in depicting adulterous affairs than Americans, one such “midsummer” crush near the end of the film is emotionally unsatisfying, particularly since it involves an intriguing backstory of three men arguing over the woman.

I liked spending time with the Vuillards and sometimes felt as relaxed as the house guests. The house is a great depository of paintings, books, and records. The Vuillards are very tolerant with the family’s eccentric behavior, which involves daughter Elizabeth constantly sulking about the house and son Henri knocking on the door in the middle of the night, appearing with a Jewish woman who has no desire to partake in the Christian festivities. It should be observed that years before this Christmas, Elizabeth, in fact, brokered a deal in court to bail out the debt-ridden Henri. The terms involved Henri being banished from the family. But if Christmas is the seasonal panacea that brings the family together, the larger question of Henri’s long absence isn’t pursued nearly as rigorously as one might expect.

I was also unnerved by Melvil Poupaud’s close resemblance to Colin Farrell. This is certainly not Poupaud’s fault. He was no doubt born looking this way. But like Farrell, Poupaud’s character has forgotten to shave, and I kept expecting an eleventh hour sex tape to show up. It doesn’t help that Desplechin reminds us of this physical similarity by having Poupaud stand next to a film poster with Farrell’s name on it.

Desplechin, incidentally, is capable of wry subtext, such as the vulgar play-within-a-play on Christmas Eve, itself suggesting Midsummer‘s staging of Pyramus and Thisbe. The difference here is that Desplechin’s play-within-the-play has profane words shouted by young children. I can also report that, in France, The Ten Commandments plays on the television during Christmas. And it’s interesting that the French herald the birth of Christ with this televised opus while America contends with Charlton Heston’s fake beard and booming voice upon celebrating Christ’s resurrection. I was not aware of this.

But despite the unslain Abel playing Cecil Taylor and Charles Mingus, A Christmas Tale is neither particularly jazzy nor especially groundbreaking. This is somewhat surprising because Desplechin does have a few interesting ideas. When one character reads a letter, we see the man who wrote the letter reading the words against a blue backdrop. (Later in the film, when another letter is received, the light around that letter fades to black, suggesting Time stopped. But nobody ages sixteen years.) A Christmas Tale is the French cinematic equivalent of a cozy, okay in its own right, but there isn’t really a mystery and there certainly isn’t an able sleuth to delve into the modest behavioral conundrums kept ever so slightly at bay.