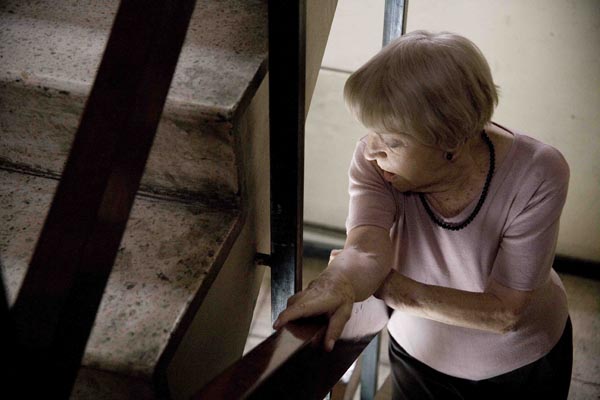 If you’re making a film featuring an older woman with a middle-aged narcissistic daughter who enjoys snorting up coke in her mother’s bathroom, then a little perspective is in order.

[This is the eighth in a series of dispatches relating to the 2010 New York Film Festival.]

I am pleased to report that, in addition to the promised titular felines, the film Old Cats features a few dogs and numerous actors in bee costumes. And I don’t think it’s possible to convey in words just how much it tickles my heart to find a film going well beyond the anticipated tally!

The literal old cats here, living with metaphorical old cats (that is, a couple in their eighties), serve the story well. Their flapping tails reflect the octogenarian couple’s inevitable last sighs. It helps immensely that we’re introduced to Isadora (Belgica Castro) and Enrique (Alejandro Sievking) as they are being lazy in bed. And, indeed, this Chilean flick is most interesting when it sticks resolutely to the interior (in this case, an eighth floor apartment with a malfunctioning elevator) and when it evades narrative demands. It is clear to me that filmmakers Pedro Peirano and Sebastian Silva have a great desire to portray consequential life (more on that rickety lift in just a mite), but they have a distressing distrust towards realism. This is odd, because Peirano and Silva have such a knack for it. When Isadora experiences senility, her declining mental state is telegraphed by a rumbling tone and what sounds like sequenced strings in the background. Considering the film’s China Syndrome-like commitment to drama sans music, and considering the film’s willingness to depict (almost in toto) the failed boot of a dying desktop computer*, these belabored attempts at surreality detract rather than grab.

This may be part of the point. After all, if you’re making a film featuring an older woman with a middle-aged narcissistic daughter who enjoys snorting up coke in her mother’s bathroom (not that Isadora notices this, but at least her writer husband is on the case), then a little perspective is in order. And I wouldn’t ding the directors so much over this lunge towards the phantasmagorical if they hadn’t delivered so many scenes in which the absurdity of a domestic situation hadn’t been sufficiently established already! I’m thinking of such moments as Rosario (the above-mentioned druggie daughter, played by Claudia Celedon) trying to unload some “healing tablets” (bars of soap that, like any phony New Age narcotic, profess to deliver great cures to their users) while visiting her mother. And if this “surprise” isn’t bad enough, sadly timed after Rosario’s nostril tangos with a spoon, Rosario deigns to reads out the instructions to all assembled. Later, when Rosario doesn’t get her way, she’s calling mom “an evil witch” (actually, something worse in Spanish) when she isn’t trying to get her to sign a power of attorney. Oh, and did I mention that Rosario has a lover named Hugo, whose original name is Beatrice, and that Isadora’s failure to comprehend a woman named Hugo forms one of the running gags? (Later in the film, a few stray family members show up to put this troubling Isi-Rosario dynamic in perspective.)

So the film’s first hour has the twisted dynamic you’d expect from an early Mike Leigh movie (Abigail’s Party comes to mind), where the character actions naturally escalate into chaos and lead us to wonder just how much boorish behavior Isi and Enrique will tolerate before they throw Rosario and Hugo out. I mean, they’ve had a wonderfully lazy morning, complicated by the elevator going out (meaning that Isi, who has hip problems, is trapped upstairs). There are cats who are starving and need food. Isi has just had an unanticipated episode in which she has kept the faucets on and overturned a drawer of knick-knacks upon her bed. And then the irksome Rosario shows up, tyrannically demanding that the cats be shuttled away into another room because she’s allergic to them. Anyway you slice it, this is a great setup for a farce or a melodrama. Hell, you don’t even need a plot. Just let the characters wander about and do what they do.

But unfortunately the filmmakers feel some strange need to tie it all together. The strange need to provide an answer to everything is what ultimately simplifies an initially charming domestic mystery. Earlier, I mentioned the dudes in bee costumes. Well, that’s all part of some television commercial that’s shooting across the street from the apartment building. That metaphor, in and of itself, is all that is needed here to illustrate the point that certain atavistic qualities are buzzing about on the outside the building: the insects that will sting, searching for their honey. (That wouldn’t be Rosario and Hugo, would it? Preposterous figures who will sting you in an instant.) And yet the filmmakers opt to return to these bees late in the film that just isn’t necessary when there’s the more fascinating aspect of Rosario being incapable of parsing her mother’s state of mind (“She’s playing the victim!”) or remembering long-term memories.

Thus, I feel compelled to conclude this review with an Emily Dickinson poem:

Like trains of cars on tracks of plush
I hear the level bee:
A jar across the flower goes,
Their velvet masonry

Withstands until the sweet assault
Their chivalry consumes,
While he, victorious, tilts away
To vanquish other blooms.

His feet are shod with gauze,
His helmet is of gold;
His breast, a single onyx
With chrysoprase, inlaid.

His labor is a chant,
His idleness a tune;
Oh, for a bee’s experience
Of clovers and of noon!

* If there are any hard-core geeks or Wired contributors reading this (he posited ever so humbly), are there any other movies that have lingered on a computer booting up? I’m honestly drawing a blank. But Periano and Silva are to be commended for replacing kitchen sink realism with heat sink realism!