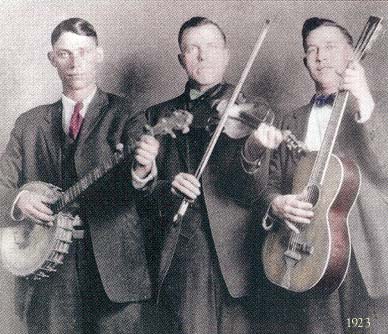 You see them on street corners and bars, sometimes in the corners of restaurants. Fiddle and banjo players. They congregate in alleyways and parking lots; they come together in houses, apartments, behind barns, next to railroad tracks, all across America, a network of steel strings squealing and thumping. You can see the lines of cars along the side of the road, hear the din through the windows, and if you like what you hear, once you step inside, it’s almost impossible to get back out. You don’t want to.

It must have happened something like this: Somewhere in the early nineteenth-century American South, a sharecropper from the British Isles, a fiddle hanging from his hand, sat down with a West African slave holding a banjo, and they hammered out a sound from the fiddle’s drive and the banjo’s shuffle that nobody had ever quite heard before, desperate and joyful, the sound of parties and arson, two ways to burn down a house. It’s unclear exactly how it spread, but it was all over Appalachia by the 1920s, when Okeh Records put the label of “old-time music” on their recordings of scratchy fiddles and stabbing banjos, howling singers already fifty years out of date from the hot new jazz 78s Okeh was cutting. But it was a stubborn thing; it survived for decades, spawned bluegrass and country, sending out those kids to get on the radio while it stayed in living rooms, porches, dance halls, parties in the woods. It made Pete and the rest of the Seegers, it made the folk revival, but it also made Bob Dylan, Bruce Springsteen, and all the purveyors of the roots rock and alt-country that followed, the ones tapping into the Old Weird America of last card games and murders by the river. It made all of these things but stayed itself, our country’s ecstatic and violent pulse.

Growing up in Ithaca, New York, I heard old-time music a lot, saw it played, danced for hours to it. As a boy who liked to shake it, I was drawn to its energy and menace, the dark, hypnotic beat the bands could set up and let spin for hours. I watched the musicians start up a tune and get possessed by it, their bodies contorting, their eyes rolling back in their heads. I wanted what they had, I wanted to go where they were going. But as a budding musician, I was terrified of it. I had taken classical violin lessons since I was four, but when I watched fiddle players, I couldn’t comprehend how what I was seeing could produce what I was hearing; I didn’t even understand how they started the tune, when they knew to sing, when they knew to stop. It looked like telepathy. So for a couple of years I didn’t even try to play it. I played in orchestras, played trombone in a reggae band. Went to a lot of ska shows. But at last, in college, a friend of mine started playing banjo and needed a fiddle player, and I decided to give it a try. I took a couple of lessons from Judy Hyman. Went to a couple of festivals and a lot of jams. Got a banjo. Got my ass kicked around a lot; two hours into a long, loud session, my fingers were bleeding, my throat ragged with shouting, and the muscles in my arms were begging me to stop. I woke up the next morning with my voice gone, sometimes a bandage or two on my hands. But by my mid-20s, I was a good fiddle and banjo player. I could play for hours on end, drive the groove, get people to move. 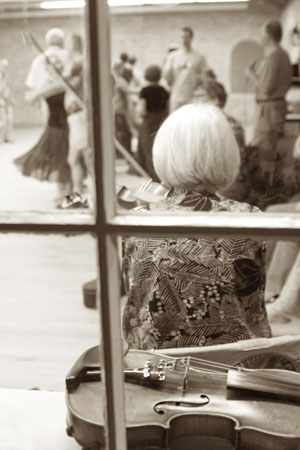 The music, however, seemed to be dying. The actual old-timers, the ones who had taught the hippies how to do it in the 1970s, were actually dying, one after the other. On my first visit to a festival down south in 1997, I seemed to be one of about five musicians under the age of thirty. Old-time music had seen a big comeback with the folk revival—people my parents’ age—but from where I stood, it seemed like that might be the end of it, for reasons I couldn’t fathom. Nathaniel Rowan, a fiddle and banjo player, saw the same thing; we gravitated toward each other immediately, two moths to a dwindling flame, in New York City in 1998. I learned to really play the banjo on a park bench, with him playing fiddle and two punk kids cheering us on. Just about everyone else in the scene was decades our senior. Rocking players, full of energy, some of them could party us into the ground. But who would be playing the music in twenty years? Old-time had survived for 150 years already, but maybe we were it.

We’re not it any more. Old-time has always been everywhere, a skin stretched across the continent, but lately it seems like that skin is getting thicker. In New York, more people in their thirties age showed up, good players: Thomas Bailey, Rhys Jones and Christina Wheeler. They’d been playing for years already and sounded like it. But it was more than just people moving around, coming to the city. “In the last five years, I’ve noticed that it’s younger and younger,” Nathaniel says. “It seemed like suddenly it was really cool to play banjos and ukuleles—maybe because of O Brother Where Art Thou, but it seemed kind of punk rock, too.” Joe “joebass” DeJarnette of the Wiyos has been out to Portland, OR recently, where he says “the scene is these young punk kids. They live in these sheds and get their food from dumpsters and play old-time music. A bunch of kids from the West Coast are moving to North Carolina to be closer to the music and the culture. And there’s this back-to-the-woods thing that goes right with it.”

Musically, old-time is indestructible, a big, fat groove. You can bring anything to it and it survives—maybe because, like most genres of music, it was never pure, always a hybrid. It began as an American thing, the collision of Europe with the slaves of Africa with the ghosts of the native tribes that the Europeans destroyed and displaced. Over time, the people who played it—both those who grew up with it and those who found it later in life—brought to it the accents and inflections of other styles of music: parlor music, jazz, the blues. Today is no different, with people playing it like punk, like funk. Like Afro-beat, like smoked-out reggae. Like rock ‘n’ roll. Or they play it straight, no chaser. Any way they do it, it’s groovy.

Mr. DeJarnette lays it down thusly: “Old-time is one of the few kinds of music you can play without dealing with the music industry in any way, shape, or form.” All of the source recordings are public domain, but you really learn to play it—as I did, and everyone I know did—from person to person, at jam sessions, house parties, festivals. And the more you play, the more you meet people, and the more fun you have. To play old-time is to find yourself partying on a Wednesday, grooving in someone’s kitchen for ten hours, and all you need to start is a crappy instrument and the will to rock.

And Clifftop, the festival on the round peak of an isolated hill in West Virginia, has exploded into a ten-day, twenty-four-hour city of joy. It’s a sprawl of tents and campers, tarps and bungee cord, kitchens made from card tables and Coleman stoves, couches hauled out of vans. A place called Camp America. And there’s music all the time. It’s there in the morning when you wake up, it’s there in the hot afternoons; it’s there when the rain flows all around you and hammers on the tarps and roofs of cars. And at night, the warm glow from the thousands of lamps and lanterns lights the trees from below, and the music buzzes all around you like a million insects. If you walk around, you’ll see a campsite decked out to look like a Paris café, a gypsy jazz trio bouncing in the corner while a couple dances in the gravel. You’ll see a giant Cajun dance party under a carnival tent. Hillbillies rocking like they did a century ago. A dense ring of young hippies in the dark, heads bobbing, playing until their hands bleed and screaming out the lyrics over the din in their ears. But you won’t walk around that much. Sooner or later, you’ll find yourself in a circle of your own, with people you can’t recognize in the dark, two hours into a six-hour jam, and you’ll pull your grooves from the crickets in the trees, from the music all around you, from your fingers, which can’t stop moving, and you’ll remember everything all over again, why you’re there and how you started, all the jams and the faces of everyone you’ve played with in between. Why you started playing the music in the first place, and how the music will still be there long after you’re gone.