I do not toss around praise lightly, but Alfonso Cuarón’s Children of Men is the best movie of 2006. It is the best dystopian movie since Blade Runner, the most pitch-perfect juxtaposition of detail since I don’t know when (maybe Jacques Tati’s Play Time), the most rugged and bone-crunching depiction of war violence since Saving Private Whitey, a film with more balls than that cinematic castrato Quentin Tarantino will ever have in his entire oeuvre, who is a pansy and an assclown and an overgrown adolescent in comparison to Alfonso Cuarón. Cuarón has guts, intelligence, and an innate no-bullshit instinct I haven’t seen on the screen since Samuel Fuller. It is something of a miracle that such a brilliant film was made from a humdrum P.D. James potboiler I read years ago. But Cuarón has done it. This is The Battle of Algiers for the present day, cast deceptively in a future setting. Its terrifying possibility is that the world we see on teevee will become our world and it has the temerity to shake us out of our complacency. 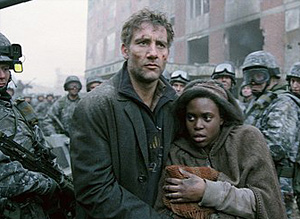 The film is consummately acted, meticulously staged and photographed. Even Clive Owen is used in ways that we haven’t quite seen him in before, teetering between vigilant and vulnerable, ready to crumble like a disused salt shaker into the smoldering hell surrounding him.

It is not an easy movie to watch, but it is cinema personified. The Mexicans know what they’re doing. They have given us three brilliant films in 2006 (Guillermo del Toro’s Pan’s Labyrinth and Alejandro González Iñárritu’s Babel being the other two). If Hollywood is wise (oh one can dream!), they will give these men the keys to the kingdom. But it is Children of Men that has the emotional heft: alternating between joy and horror and surprising us again and again with blink-and-you’ll-miss-it transitions carried out in continuous long takes. It does not insult its audience. It presents us with an apocalyptic situation without explanation, much as Night of the Living Dead frightened in 1968, and it allows us to connect the dots with revelations imploding in our heads hours after viewing the movie. That it presents nightmares without skimping out on hope is no small feat. Other dystopian movies present characters who are as miserable as the settings. Not Children of Men, which is cynical, but there’s always room for Jello (or, at least, Michael Caine’s Scooby snacks).