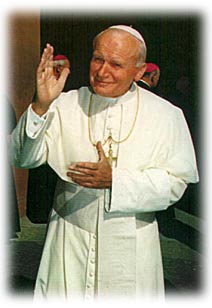 Pope John Paul II, long reported to be suffering from ill health, began early training for the Roman Catholic Triathlon this morning. The Pope had long tired of the endless window waves and hoped to demonstrate to the world that, like other elderly leaders before him, he could swim across the Yangtze River in record time.

“Reports of my demise are greatly exaggerated,” said the Pope. “I’m feeling better than ever and I don’t know what these reporters are talking about.”

The Pope’s acolytes proved just as astonished as anyone else. The Fountain of Youth, discovered last night in the back of a Starbuck’s, was moved to the Vatican, where the Pope drank agua fresca and began displaying an unexpected vigor. The Pope reportedly “planned to live forever, or die trying.”

When asked what his Catholic constitutency would do now that the Pope’s health was secure for at least another 100 years, the Pope suggested that they either read the Bible again or take up cross-stitching.