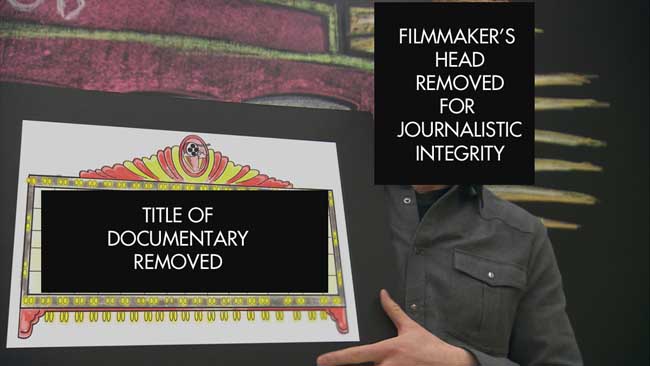 A review of an Unnamed Documentary on product placement. Who is being scammed here?

We can accept that advertisement is ubiquitous, except in São Paulo, where a recent law has banned advertising from the city, creating (as the film demonstrates) an absolutely serene environment that becomes exotic and rather beautiful when compared to our own. As the Unnamed Documentary rightly points out, there is no way that a Hollywood blockbuster can make an obscene profit without a co-branding relationship. So perhaps some advertising is necessary for a movie. On the other hand, would you make a documentary on political corruption while engaging in political corruption? If you are interviewing a man who has butchered his family, would you butcher your own family?

The failure of any figure in the Unnamed Documentary, save one tepid introspective moment involving the Filmmaker, to question these motives and the giddy placement of featured products throughout the many interviews leaves any honest person questioning the Filmmaker’s motivations — especially when he lies to Ralph Nader about a certain pair of shoes he’s promoting being manufactured in America (unless Nader is in on the joke, which is likely). (Indeed, the Filmmaker proved so ambitious that he even managed to get product placement within the Unnamed Documentary’s title.) The Unnamed Documentary is somewhat entertaining, but it doesn’t exactly tread new ground. The Filmmaker isn’t nearly as smart or as successful or as brave or as crafty as he thinks he is (save in obtaining money for himself, a serious ethical problem that I’ll get to in a bit). For if he were, he would have figured out a way to get the very corporate forces to finance something that was truly dangerous and that truly made them look terrible. The Filmmaker insists that he had total control over the finished product, but can one really have any control on a film in which it becomes necessary to stay in certain hotel rooms, fly certain airlines, drink certain drinks, and pump gas at certain gas stations? One cannot imagine DA Pennebaker or Barbara Kopple working this way. Thus, the Filmmaker is a fraud and a hypocrite who does not respect the intelligence of the very mass audience he purports to enlighten.

When I exited the screening room, many of the products (none of which I will name) were available. Every person who attended the screening, save my girlfriend and me, picked up the free goodie bag without so much as a shred of remorse. The screening crowd included “critics” and other people who purportedly practice journalism. And even though I was practicing an admittedly shaky and very casual form of journalism, for me, it was a basic ethical tenet not to submit to the game. If someone gives you money or considerable material goods when you cover something, is not your integrity compromised? We’re not talking about a free book or a free movie or a free ticket that you are being given for critical consideration. For this, there is no quid pro quo. If you permit me to experience a work of art for free, then you do not buy my opinion. But if I am offering my opinion on an Unnamed Documentary that concerns product placement, my feeling is that, if I take any products you shill after the screening, I am morally compromised.

Why can’t I name this film? Because that’s also part of the game. If I spill the title, then I will be promoting it. And I will be doing exactly what the Filmmaker wants. During one scene in the Unnamed Documentary, the Filmmaker is asked to guarantee a set number of media impressions if he is expected to receive the money for sponsorship. So if I mention the name of the film or the filmmaker, then my review may very well count as a “media impression.” But I don’t want to do that. I’m pretty confident anybody reading this can figure it out. However, if anybody names the film or the filmmaker in the comments, then I will replace their names with “Unnamed Documentary” and “Filmmaker.” Unlike the Filmmaker, I actually still want to stand by something.

I had hoped that the Unnamed Documentary would be a legitimate protest against corporate sponsorship using its very tools — see Chumbawamba taking money from GM to use “Pass It Along” in a commercial and then disseminating the GM money to Corpwatch to protest it, which is a very funny statement about the futility of activism. But the Filmmaker plans on taking all the money. To my knowledge, he doesn’t plan on giving the profits to anti-corporate forces or people who want to fight advertising in all of its horrific forms. There is nothing in the press notes or the end credits to suggest that he will do this. In other words, the Unnamed Documentary stands for nothing save the Filmmaker’s materialistic gains. The Filmmaker includes several prominent moments with his kid. And the Filmmaker’s true narcissistic goal becomes apparent with these very scenes. So the Filmmaker and the Unnamed Documentary are both situated against the audience’s interest, assuming that the audience has hoped to be informed about the increasing role of product placement in current American cinema. It’s very possible that they don’t care and that they’ll wish to think that, by paying for the Unnamed Documentary, they’ll believe themselves to be “in” on the joke in the same way that a bunch of rubes believed themselves to be “in” on the joke when Charlie Sheen took their tickets for the Violent Torpedo of Truth Tour and performed poorly and was booed by those who attended. “I already got your money,” responded Sheen.

I don’t think it’s a stretch to say that the Filmmaker is responding to the audience with pretty much the same attitude in not standing for a corresponding set of virtues. And this makes the Filmmaker as selfish and as immoral and as bad-mannered as Charlie Sheen. There are news reports now circulating about the Filmmaker obtaining product placement for another documentary. And when you pull a move like that, it doesn’t make you a prankster. Your set of values is no different from the creative accountants who ensured that General Electric would pay no taxes during a year in which they earned $5.1 billion in profits. It turns you into an asshole who is very much a part of the problem.