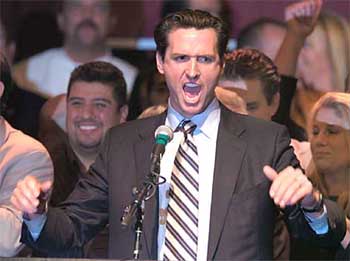 What disturbs me more than the mouth is that not one of his follicles is out of place. If ever there was a poster boy for pomade, Gavin Newsom is it. Too bad he couldn’t straighten his tie though. But that could be the hard front lighting.

[1/20/06 UPDATE: I should note that, at the time I wrote this post, I was looking for any kind of chinks that I could find in Mayor Newsom’s carapace, short of cracking jokes about his crumbling marriage. I voted for Matt Gonzalez (he was the long-haired, far left candidate and he lost) and to easily explain the niceties of the 2003 San Francisco mayoral race to out-of-towners, the only way I could do this without droning on for 15 minutes, delineating each candidate by positions and the like, was to concentrate exclusively on each candidate’s hair. Presumably, this spilled over after for a few months after the election and made its way here. But in light of what he accomplished only a few months later, I learned to like Gavin — certainly a lot more than Willie Brown, the slick milliner of hopeless corruption who preceded him.]