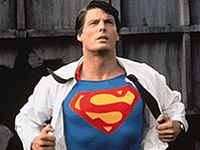 Superman was the first movie I saw in a theatre. I was four years old, but I remember being taken by my mother to one of the Century domes (long since demolished) in Corte Madera. I remember the lines and the sense of excitement that the audience would, as the advertisements promised, believe that a man could fly. But most importantly, I remember Christopher Reeve’s commanding presence in the movie poster and as he flew over Metropolis, his steel blue eyes shooting an impenetrable look to any who would dare return his gaze. (There was of course Reeve’s wink to the audience during the final moment above the earth in any Superman film, but I present this in hindsight to what my four year old eyes remembered.)

The film and its sequels made an impression upon me that still resonates with me today. There are moments in my life when I find myself functioning in Reeve’s bumbling Cary Grant mode as Clark Kent, befuddled but often processing the info around me, and there are other moments where I quietly commit some noble deed while maintaining my secret identity. (I was a kid who wore Superman Underoos, for crying out loud. These things make an impression.)

So Christopher Reeve’s death (particularly after Dangerfield’s) came as a blow to me, particularly since Reeve was determined to find hope within a life confined to a wheelchair. He gazed clearly and confidently into the future and envisioned the inevitable moment where he would rise from his chair. And now, sadly, that moment won’t arrive.

In an age where tyros walking on ethical ground as shaky as Krypton just before its inevitable destruction would deny pivotal research funds to those who might need them, in an age where real heroes are at a premium, Reeve demonstrated to everyone that courage and sunny effrontery mattered most. Superman, it turned out, wasn’t a role, but the man he was all along. We are all the lesser for his loss.