Ebert spread banana oil over Jonathan Rosenbaum. Rosenbaum was spread-eagled across the popcorn booth, his bulging cucumber growing beneath the overturned extra large popcorn bucket carefully placed there by the management. Rosenbaum felt Ebert’s gentle fingers caress him, bristling across his piebald chest hair. He knew that those fingers had typed all those glowing reviews for Woody Allen. They had even given Celebrity two and a half stars. Would Ebert show him the same generosity? 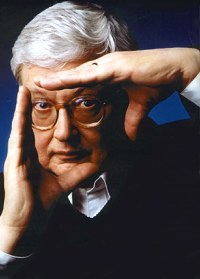 Rosenbaum hesitated as Ebert’s loving touch eased in, putting him at ease. Yes, he knew indeed how those hands had won a Pulitzer. Gene Siskel must have been a lucky guy. Rosenbaum had to confess.

“I always liked your pudgy bottom,” whispered Rosenbaum as Ebert tightened the blindfold. “Do me.”

Ebert smiled. He suddenly had an idea for his Video Pick of the Week. But this time, it was a Video Pick for one.

“You’re just saying that because of the recent stroke,” Ebert replied. “The good news is that you’ll be my love slave for the weekend.”

“Don’t worry. We’ll sit through Dekalog together. It will be like a nice little picnic. The wife, you see, is out of town.”

Ebert puncutated this last sentence by taking off his glasses and licking the banana oil, applying his tongue in a soft loving curlicue around Rosenbaum’s left nipple. Rosenbaum liked it when Ebert did that. J. Hoberman wasn’t nearly as good.

“Richard!” he screamed down the art deco lobby.

Ebert clapped his hands. Merely a second later, Roeper, the weasly little hunchback, scampered across the theatre lobby. He dragged the corpse of Vincent Canby, now well-used. Roeper, the beady-eyed necrophile, had jismed into Canby’s nostrils twelve times that morning. When Ebert saw Roeper’s gaping maw, he tried to stare away.